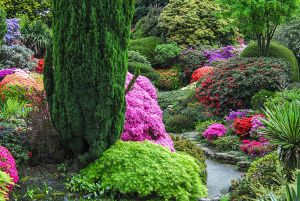 Leonardslee Gardens
Leonardslee is a superb 200 acre valley garden spotted with lakes. Alpines, rock garden, and a bonsai exhibit. Best in: April for camelias and magnolias, and May for rhododendrons and azaleas.

This historic garden was begun in 1801 to complement nearby Leonardslee House. The history of the site goes much further back, however, into the Middle Ages, when St Leonard's Forest stood here.

Though many early tracts of forest were cut down to make way for agriculture, the soil of St Leonard's Forest was too acidic for farming, so the natural woodland remained until the 16th century, when trees were cut down to make way for iron mining. Charles II granted the forest to his personal physician, Sir Edward Greaves, and the estate later passed to the Aldridge family.

Part of the ancient forest estate was sold to Charles G. Beauclark in 1801, and it was he who built a house known as St Leonard's Lodge. The Beauclark family began to create the first gardens here.

Then in 1889 Sir Edmund Loder bought the estate from his parents-in-law and began to plant the existing parkland with a variety of trees, azaleas and rhododendrons.

Loder was an avid plant collector, and filled his garden with exotic and rare species brought to Britain by plant collectors. He built the rock gardens, using a mix of natural rocks and artificial sandstone. The rock garden is surrounded by coniferous trees to provide a sheltered environment.

The gardens are set in a steep-sided valley containing a series of 7 man-made ponds. Some of the ponds were created to provide power for nearby iron works.

One rare feature at Leonardslee is a colony of wallabies which wander freely in the gardens. One of the last additions to the Victorian gardens was a rock garden near the house, established in 1890. At the same time a series of caves were built for mouflon, or wild sheep, but they are now used by the wallabies.

NOTE
After years of uncertainty about the garden's future after a change of ownership we are delighted to report that Leonardsle Gardens is once again open to the public!

More self catering near Leonardslee Gardens >>