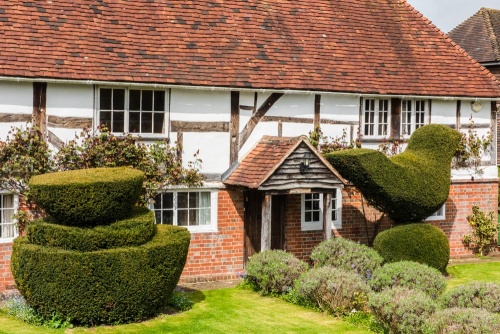 A timber-framed house in Henfield

Formerly a village that thrived on the tanning industry, Henfield's heritage as an important staging post in days gone by is also remembered in the number of fine coaching inns to be found in the village. The parish church of St Peter is 13th century, with Victorian remodelling, though there may well have been a church here since the 8th century.

The most interesting historic building in Henfield is the intriguingly named Cat House; a lovely 16th-century thatched cottage named for the row of wrought iron cats who prowl beneath the overhanging thatch-eaves.

The story goes that the owner of the cottage had a canary who was killed by the vicar's cat. The canary's grieving owner put cats all about the cottage so that the vicar who see them every time he passed!

A small museum of local life is located on Coopers Way. 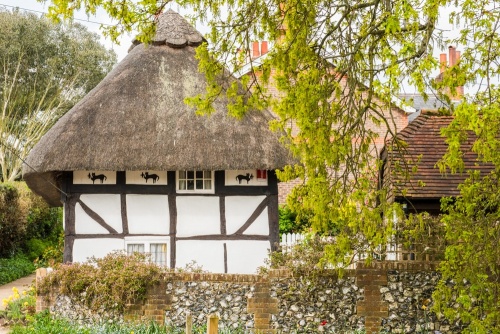 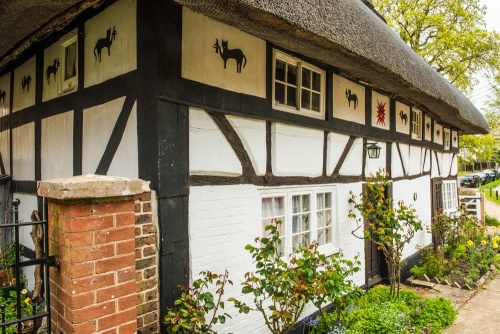 Another view of Cat House

We picked up a village guide from the council offices beside the Henfield Museum on Coopers Way. The guide outlines a heritage trail around Henfield, pointing our historic buildings along the way. We followed the trail, and what follows is our highlights from the walk.

The trail begins on at the George Hotel on High Street, a few steps from the museum and council offices. Though the hotel facade looks Georgian, you can see 16th-century timber-framing if you walk around to the rear of the building. You can also see a jettied upper floor on the north side.

Across High Street, on the corner of Cagefoot Lane, is the village war memorial, erected in 1923. In 2000 the names of all those local residents who lost their lives in both world wars were added.

Just up Coopers Way from High Street is the Evangelical Free Church, built in 1832 as a Congregationalist Chapel.

Back on High Street are two 17th-century coaching inns, the Plough and the Whaite Hart. The latter was used by the London to Brighton coach for changing horses. It was also a popular watering hole for local tanners in the 17th century. 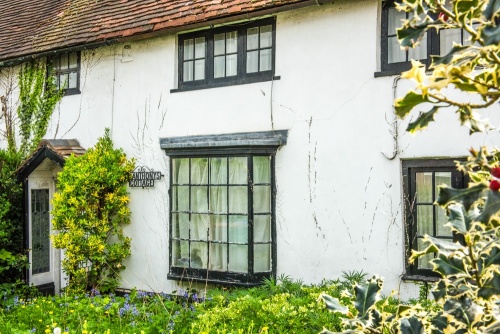 A few steps from the White Hart is St Anthony's Cottage, built around 1390 and the oldest of five traditional hall houses surviving on High Street.

If you cross High Street from St Anthony's Cottage and enter Church Street you quickly come to Martyn Lodge. From 1862-1891 this was the home of Canon Nathaniel Woodard, who founded 16 'Woodward Schools', among them Ardingly, Hurstpierpoint, and Lancing Colleges. 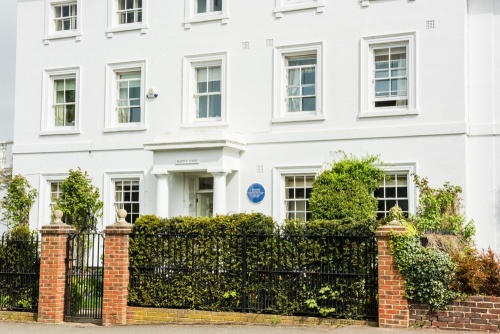 Carry on along Church Street and turn into Parsonage Close. On the opposite side of the street, you see the gates of Parsonage House. This was the home of Henry Bysshopp, who was named the first Postmaster General by Charles II in 1660. Bysshopp is credited with inventing the first postmark, known popularly as 'The Bysshopp Mark'.

Cross back over Church Street and up the lane towards St Peter's Church. Here you see Cat House, mentioned above. The house was built around 1550 by an eccentric character named Bob Ward, who was determined not to let Canon Woodard forget that his cat had killed Ward's canary.

From Cat House go up the steps to St Peter's Church.

The church is usually open daylight hours to visitors and it is well worth exploring. There was a wooden Saxon church on this site around AD 770, probably occupying the site of the present chancel. The current attractive stone building is 13th century with later additions. The church boasts excellent Victorian stained glass by CE Kempe. Look for Kempe's signature wheatsheaf symbol.

On the far side of the churchyard is a lovely timber-framed house called, appropriately, Old Tudor Cottage. If you carry on past the cottage on Church Lane you will pass Southlands and Bramble Cottage, built in 1834 as a National Girls School, a role they fulfilled until 1952. Beside the cottages is the Catholic Church of Corpus Christi, built in 1929. 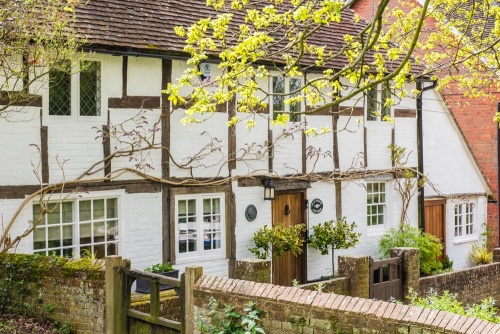 If you follow the footpath at the end of Church Lane you will pass a large field. This is Tanyard Field, and from the middle of the 16th century it served as a tannery. At the south end of the field is a spring-fed pond, used to soak the hides. The area around the pond is now a picnic area. 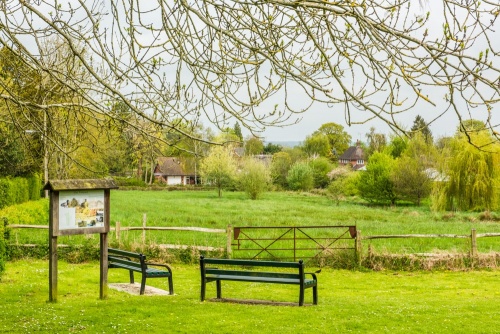 Across from Tanyard Field is one of the most interesting historic buildings in Henfield, a large timber-framed house known as Potwell. The blue plaque on the house exterior commemorates the fact that the 19th-century botanist William Borer was born here. 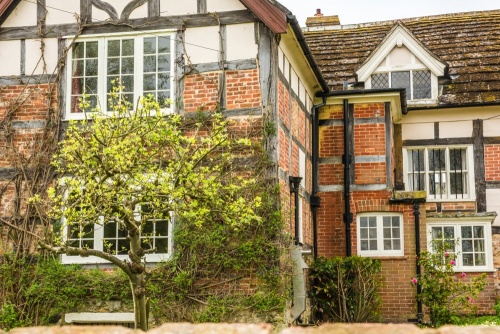 From Potwell follow Blackgate Lane to its junction with Nep Town Road. Just before the junction, you will see yet another timber-framed building known as Pendrells. The house dates to the late medieval period and was once the home of the great-grandson of a miller named Penderel, who hid Charles II in the Boscobel Oak following his defeat at the Battle of Worcester in 1651.

If you turn right and follow Nep Town Road west you will come to an unusual structure of green tin. Though it doesn't look it, this tin building was a chapel, built in the late 19th century. Retrace your steps past Pendrells and you come to the former infants' school, built on land donated by William Borer in 1844. 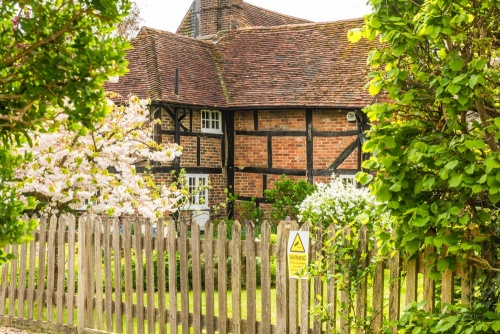 Past the old infants' school is Cedar View, built as the village workhouse in 1736. Proceed to the end of Nep Town Road and you met the southern end of High Street. Just across the road you can see the 'Borer Bank', planted with rare flowers used by botanist William Borer in the garden of his residence of Barrow Hill House.

From this point simply walk up High Street to your starting place.

I highly recommend taking the heritage trail. It really does help give you a sense of Henfield's history and some of the attractive historic buildings are exceptional. 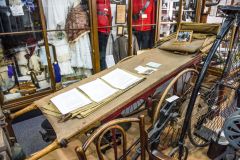 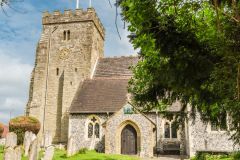 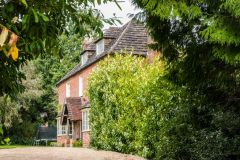 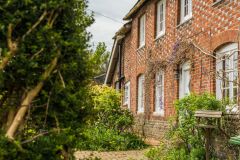 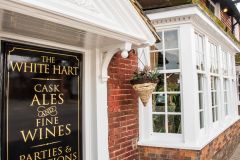 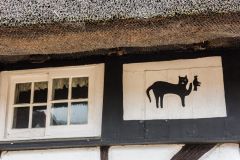 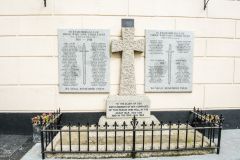 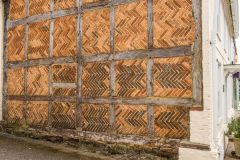 More self catering near Henfield >>

More bed and breakfasts near Henfield >>