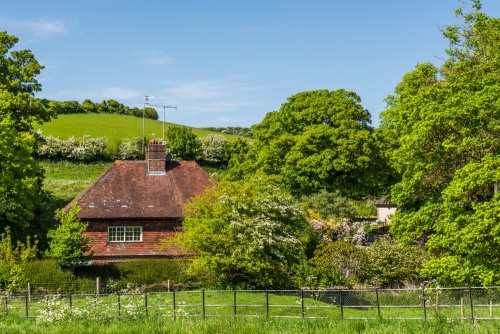 Saddlescombe Farm is a historic Downland Farm, one of the last remaining farms in the Downs with its original buildings. The farm dates to at least the time of the Domesday Book, and was later the property of the Knights Templar for over a century. The farm is set beside an expanse of ancient woodland affording attractive walks.

The Saddlescombe estate is owned by the National Trust. The estate takes in 450 acres and is operated by tenant farmers who maintain a traditional cattle, sheep, and arable crop farm. The Trust holds open days throughout the year when visitors can explore the farm and its collection of historic buildings, some of which date to the 16th century.

It is very possible that Saddlescombe was farmed in the prehistoric period. Archaeologists have uncovered Mesolithic arrowheads, Bronze Age artefacts including loom weights, and Roman pottery sherds.

The first written records of Saddlescombe come from the Domesday Book of 1086, when the estate was recorded as Selscombe. The Domesday Book entry mentions that there were 13 acres of meadow, land for 10 ploughs, woodland capable of supporting five hogs, and a human population of 135.

In 1225 the Knights Templar purchased Saddlescombe. The military/religious order developed the farm, operated corn and sheep farms, built a windmill, and established a chapel. Interestingly, they maintained only one horse but had 12 oxen for ploughing. They also had a herd of 600 sheep.

A remarkable letter exists from 1267, written by Archbishop Azo to the Master of the Templars in England, requesting that they accept Joan Chaldese as a member of the Saddlescombe Preceptory. Apparently Joan was an aged woman, the widow of Sir Richard Chaldese. She had taken an oath of chastity and wanted to end her days as a member of the Templars. No reply to the letter has been found but it would be remarkable indeed if the Templars accepted a woman into the Order.

The Templars were suppressed in the early 14th century and the estate was given to another order of knights; the Knights of St John of Jerusalem (the Hospitallers). When the Hospitallers, in turn, were suppressed by Henry VIII Saddlescombe passed to Sir Anthony Brown of Cowdray. The Brown family owned Saddlescombe for the next 30 years, though they never lived here but rented it out to a succession of tenant farmers. 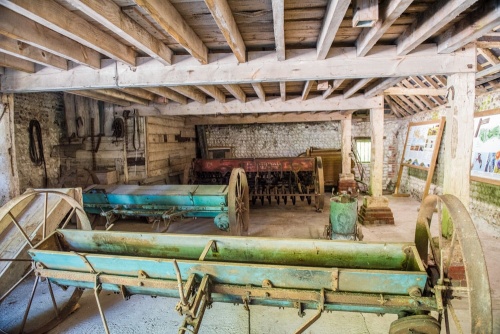 Farm equipment in the 18th-century barn

Much of what we know about the recent history of Saddlscombe comes from the writing of Maude Robinson, who grew up at Saddlescombe. Her book, entitled A South Down farm in the 1860s' is a vivid and poignant account of family life on a Downland farm in the late Victorian period.

One of the episodes recounted by Maude Robinson was the time a group of farm labourers dubbed The Poynings Gang went on strike because Mr Robinson, a staunch Quaker, refused to give them the traditional barrel of beer and instead, offered them oatmeal and water flavoured with lemon. The labourers considered the beer a traditional right, and refused to work.

One of the major attractions at Saddlescombe is a Donkey Wheel, where for centuries the farm workers used a donkey to draw water from a well. The Donkey Wheel stands beside the South Down Way National Trail and can be visited even when the farm itself is not open to visitors.

The Donkey Wheel draws water from a well known to have been deepened - though not dug - by the Knights Templar in the 13th century.

One fascinating fact is that the donkeys could be trained to walk one way for 12 minutes, step off the wheel, turn around, step back on again, and start walking in the opposite direction. This 'automated' approach meant that the donkeys could raise and lower a large bucket into the well, fill it with water, and pull it to the surface all without human intervention. 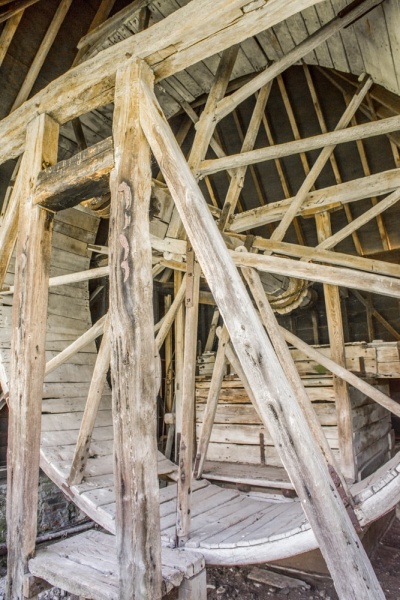 One other farm building is open to visitors even when the farm itself is not; the 18th-century Information Barn holds exhibits on the history of Saddlescombe, and places to visit in the surrounding area, including walks that take in the famous Devil's Dyke viewpoint a few miles away. Inside the barn is a collection of old farm machinery.

Surrounding the farm is Newtimber Hill, an area of ancient downland and grassland which is home to wildflowers and insects. On the northern slope of the hill is woodland thought to have existed here for over 10,000 years. The woods are at their best in spring, when bluebells carpet the forest floor.

The area affords a mix of family activities, including orienteering, kite flying, horse riding, cycling, and walking. There is a regular programme of guided walks available. See details on the National Trust website. 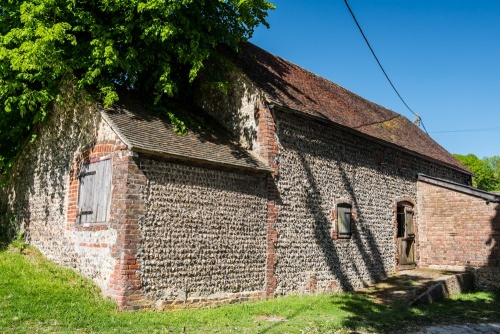 There is no parking at the farm itself, but there is a free parking area in a small layby directly opposite the entrance to the farm drive. Getting there is easy; take the minor road towards Poynings north from the A27, signposted Devil's Dyke. Bear right at the first junction, and the farm will come into view on your right after two miles, and the parking area is opposite on your left.

Be aware as you park; when we visited the ground was very rough and full of potholes that made parking safely a stressful operation. If the farm is not having one of its open days you can still go up the drive to the Information Barn, which is worth seeing just for its tradition timber-post architecture.

Our family thoroughly enjoyed visiting Saddlescombe Farm. The setting is simply idyllic, and the Donkey Wheel is a fascinating relic. 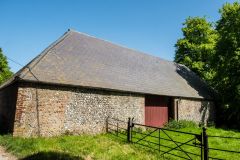 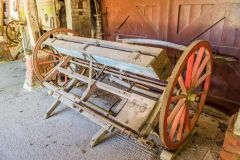 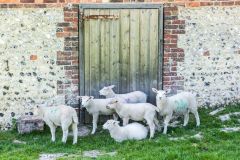 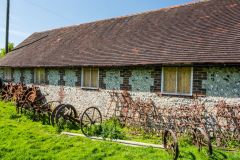 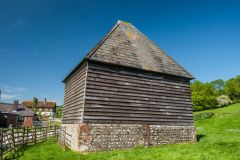 More self catering near Saddlescombe Farm >>