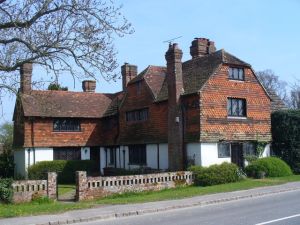 An old tile-hung cottage in Loxwood
A small, attractive village near the Surrey border, on the route of the Wey and Arun Junction Canal. The canal was a major waterway linking London to the south coast. It opened in 1816 and brought prosperity to the Loxwood area until it eventually closed in 1871. Sections of the canal have been restored, and visitors may walk along the old canal towpath.

Loxwood was for some years the home of the Society of Dependents, or Cokelers, a small Christian sect founded by John Sirgood. The name 'Cockelers' refers to the fact that members of the sect drank cocoa instead of alcohol.

The church of St. John the Baptist dates to about 1900, and is built on the site of a 15th-century chapel.

More self catering near Loxwood >>

More bed and breakfasts near Loxwood >>