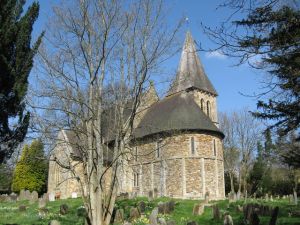 St Nicholas Church, Worth
The old village of Worth is slowly being overwhelmed by the nearby town of Crawley, but enough remains of its historic past to provide a great deal of interest. The most interesting building in Worth is the superb Church of St Nicholas, said to have been founded by Edward the Confessor.

The church retains its cruciform Saxon foundations and boasts a curious square stone bowl font that dates to the 12th century. After the Norman Conquest, Worth church was given by William the Conqueror to his son-in-law, William de Warenne, and the Warenne family arms appear in the stained glass of the north transept.

There are three Saxon windows in the walls of the nave, and much of the nave structure and its arches are pure Saxon. The octagonal pulpit dates to 1577.

To the west of the village lies Worth Abbey, a Benedictine monastery and boys school that was built as a stately home by Robert Whitehead, a 19th-century engineer credited with the invention of the torpedo.

Nearest Accommodation to Worth:

More self catering near Worth >>

More Hotels near Worth >>

More bed and breakfasts near Worth >>