HERITAGE HIGHLIGHTS:   A collection of historic funerary monuments to the Verney family of Claydon House 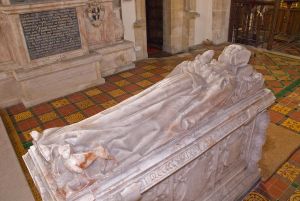 An intriguing 13th-century church in a superb position, located directly beside the 18th-century mansion of Claydon House (National Trust). All Saints is notable for its collection of monuments to the Verney family of Claydon House.

Much of the fabric is 13th and 14th century, with some rebuilding between 1509-1519 by the Gifford family. A priest's door is set in the outer wall of the church, close to the library windows of Claydon House.

Though the church is of interest as simple 14th-century architecture, the prime reason for visiting is to see the wonderful collection of monuments to the Verneys and the Giffords. These are profuse, and adorn every part of the church. The best of these are to be found in the chancel.

Against the north wall is a sizable 16th-century brass to Roger Gifford, who had the chancel built. With Roger is Mary Nansicles, his wife. Below the couple are figures of their 13 sons and 7 daughters. The brass dates to 1543. Set before the brass is an alabaster tomb to Margaret (d 1539), the second daughter of Roger and Mary. The details of the carving are beautifully crafted, giving a good idea of the sort of dress worn at the time.

Look for the figure of a small dog pulling fruitlessly on Margaret's dress in a futile attempt to rouse her. Near the altar is a memorial to Urian Verney and his wife Lettice. But this interesting monument pales beside what awaits on the south side of the chancel.

Here, almost filling the entire space, is a grandiose monument erected by Sir Ralph Verney to the memory of his father, Edmund. Sir Edmund Verney was the standard-bearer for King Charles I at the Battle of Edgehill in 1642 but was killed in the battle.

Here, his effigy is joined with those of his wife Margaret, daughter-in-law Mary, and Sir Ralph himself. The likeness of Sir Ralph was created while he still lived; the others were created following portraits still hanging in Claydon House.

The nave holds further monuments to the Verney family, ranging from Sir Henry Verney 2nd Baronet (d. 1894) to Parthenope Lady Verney (d 1890). Lady Verney was sister to Florence Nightingale, founder of the Red Cross, and Nightingale was a frequent visitor to Claydon House, where mementoes of her life and her connection with Claydon can be seen today.

More self catering near Middle Claydon, All Saints >>

The Angel Restaurant with Rooms - 10.3 miles
Aylesbury, Buckinghamshire
Stay from: £70.00

More bed and breakfasts near Middle Claydon, All Saints >>