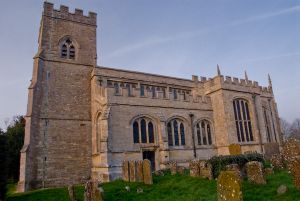 A superb Perpendicular Gothic church in a quiet countryside location. It is hard to imagine a more peaceful setting than that enjoyed by All Saints church in Hillesden. It is as if the church has wandered off from its siblings during a game of hide and seek, gotten lost, and never found its way back.

The most striking exterior feature is a stair turret above the vestry, surmounted with a pinnacled, openwork crown supported by flying buttresses.

Outside the north porch is a medieval preaching cross sadly defaced. The church is entered through the 15th century embattled north porch. Pause while inside the porch and look up; you will see that the ceiling of the porch is beautifully vaulted in a typical 15th-century pattern of radiating geometric lines.

The north door is thought to have come from Denton House (now vanished) which stood just to the east of the church. The upper half of the door has the faint outlines of a moon, star, and two suns. Perhaps more interesting are the random pock-marks that riddle the door. These are musket holes, made when Hillesden was besieged by Parliamentary troops during the Civil War.

Most of the stained glass of Hillesden church was destroyed by Cromwell's men, with the exception of the east window of the south transept, which retains 16th-century glass depicting scenes from the lie of St Nicholas. The rood screen is worth noting. It is 15th century, restored by George Gilbert Scott in the 19th century.

The chancel contains a lovely frieze of angels at the junction of wall and ceiling, each holding a musical instrument. This is very similar to a frieze in the Beauchamp Chapel at Warwick Castle. In the Lady Chapel, located at the east end of the north aisle, are monuments to the Denton family.

And finally, beside the exterior facet of the south door is an unusual recessed sundial, set into the wall of the porch.

On the wall of the chancel, to the right of the east window, is a discolouration, or shadow. Legend says that this shadow does not altar or fade, and cannot be cleaned or painted over. The shape - with some imagination and a good dose of faith - is said to represent the Virgin Mary. Local tales say that in the medieval period monks came to Hillesden to view this 'miracle'.

Nearest Accommodation to Hillesden, All Saints:

More self catering near Hillesden, All Saints >>

The Angel Restaurant with Rooms - 12.2 miles
Aylesbury, Buckinghamshire
Stay from: £70.00

More Hotels near Hillesden, All Saints >>

More bed and breakfasts near Hillesden, All Saints >>