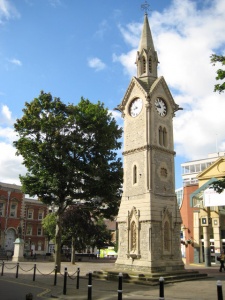 Aylesbury took over from Buckinghamshire as the county town in 1725, and since that time has grown in size and importance. There are comparatively few recognised tourist attractions in the town, but Aylesbury is surrounded by a number of popular visitor destinations, including Waddesdon Manor, Claydon House, and Stowe Landscape Garden.

In Aylesbury itself the most intriguing section of town is around St. Mary's Church, surrounded by a conservation area, where a number of surviving Georgian buildings give the area a genteel ambience.

Also near the church is the site shared by the Buckinghamshire County Museum and Art Gallery and the Roald Dahl Children's Gallery. The museum hosts exhibits focusing on the history and culture of the Buckinghamshire area, and the Dahl Gallery is a delight for children - and adults - who enjoy the stories of the prolific author.

The King's Head Hotel is a historic inn with royal associations. The inn dates to the mid 15th century, and it was here that Henry VI and Margaret of Anjou spent a part of their honeymoon, a fact which is commemorated in the stained glass of the mullioned front window. Later, Henry VIII visited the King's Head while he was wooing Anne Boleyn. The King's Head is now run by the National Trust (visitor details here).

A dramatic statue of John Hampden, a local man who became a Parliamentary leader during the English Civil War, stands in the cobbled Market Square.

More self catering near Aylesbury

The Angel Restaurant with Rooms - 8.4 miles
Aylesbury, Buckinghamshire
Stay from: £70.00

More bed and breakfasts near Aylesbury