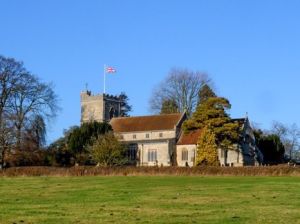 Quainton, Holy Cross & St Mary
The parish church of Blessed Virgin Mary and the Holy Cross is located at the east end of Quainton village. It is a sizeable building, with a very nice west tower. The church is built of rubble, while the tower is faced with ashlar. The current building is in Decorated style, and dates almost entirely to 1340, with the exception of the tower, which was added in the 15th century.

It seems possible that the Order of Knights Hospitaller were responsible for the 1340 rebuilding of Quainton church, on the site of an earlier church with roots in the Saxon period. The Hospitallers are also credited with building the preaching cross that stands on the village green. The Order maintained a commandery at nearby Hogshaw.

The main feature of interest at Quainton is the large number of historic monuments that crowd the interior. Among these are numerous very fine memorials of the Dormer and Pigott families, as well as a lovely monument to Dr Richard Brett, one of the scholars responsible for translating the King James Bible. Dr Brett served as rector of Quainton for 42 years before his death in 1637.

What is most interesting about these three brasses is that the inscriptions change from Norman French (14th-century brass) to Latin (15th-century brass), and finally to English (16th-century brass). There, in a nutshell, we see the changing face of English social history over the course of only 150 years.

In the north aisle is a monument to Richard Winwood (c. 1689), who founded a row of almshouses in the village that still stand today. Winwood's effigy is shown reclining and dressed in armour.

The Angel Restaurant with Rooms - 7.9 miles
Aylesbury, Buckinghamshire
Stay from: £70.00