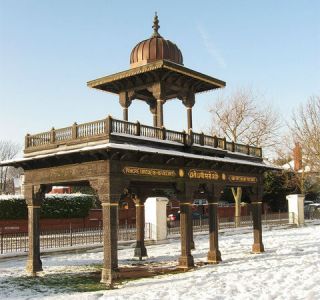 Hove
The seaside resort town of Hove is somewhat overwhelmed by its neighbour, Brighton, but Hove has a character and a history all its own. Hove is known for its wide, tree-lined avenues and Regency architecture, much of which is arranged around sedate squares.

Hove began as a fishing village, but the growth of Brighton as a resort led to great expansion and growth during the 19th century. Somewhat out of place amongst the Regency buildings is the West Blatchington Windmill. The mill was built in the 1820s and has been restored to full working order. The mill is five stories high.

A historic building of a different sort is the Hove Museum and Art Gallery. This interesting museum is housed in an ornate Victorian villa, built for John Valtance around 1870. The villa is built in Italianate style, a tribute to the popularity of Queen Victoria's house at Osbourne House on the Isle of Wight. Within the museum are galleries devoted to toys, cinema, and local history. In the latter gallery is the Amber Cup, a prehistoric relic found at Hove.

Outside the museum stands the Jaipur Gateway, and ornate gate transported to England from Rajasthan in 1886.

Nearby is the British Enginerium, a museum of engines of every kind, housed in a restored Victorian pumphouse. Within the Enginerium are electric, steam engines of all sizes, and a working beam engine.

Just outside Hove is Foredown Tower, home to a working camera obscura. The tower is set on a hilltop, offering superb views over the South Downs and the coast The exhibition is housed in an Edwardian water tower. In addition to the camera obscura, there are also interpretive exhibits telling the tale of local geography, wildlife, and flora.

More self catering near Hove >>

More bed and breakfasts near Hove >>