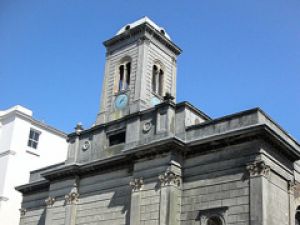 Image is (c) The Voice of Hassocks
St Andrew's is a lovely Grade-I listed Regency church designed in Italian Renaissance style by Sir Charles Barry in 1827. The building was enlarged in the late 19th century and remodelled in 1925.

The 1925 rebuilding took account of the acting priest's desire to create a more Italian experience of worship. St Andrews is thought to be the very first church in England to consciously adopt an Italianate style. Architect Randoll Blacking created striking baldacchinos (ornamental canopies) for the altar and the font. The interior features some very fine memorials, most of which date to the 19th century.

The church was built to serve the well-to-do residents of the fashionable Brunswick area of Hove. It was constructed as a proprietary chapel, that is, it was built and owned by private enterprise, not by the Church of England.

In this case, the prime mover was Rev Edward Everard. Everard and his successors were granted the right to appoint curates and keep two-thirds of the rent from leasing pews within the church for a period of 40 years.

The venture was highly successful, and numerous members of the royal family and the nobility worshipped at St Andrew's on a regular basis. Among the memorials in the church are those of Sir George Dallas and Lord Charles Somerset, Governor of Cape Colony in South Africa. In the churchyard is the grave of George Everest, the surveyor who gave his name to Mount Everest in the Himalayas.

The church is the only one in Hove to have burial vaults. The vaults were used until 1854, but in World War II were reopened to serve as air-raid shelters.

St Andrew's is no longer used for regular worship and is in the care of the Churches Conservation Trust. As of this writing, it is open Sunday afternoons or at other times by arrangement. See the Trust website for details.