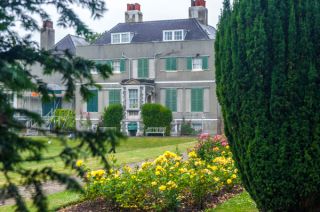 A late Elizabethan manor with later additions, Preston Manor offers a fascinating glimpse into the world of Edwardian society. Visitors see not only the formal rooms but also 'below stairs' servants quarters and the nursery. Outside, there are walled gardens and a pet cemetery.

The estate of Preston was owned by the Bishops of Chichester from the time of the Domesday Book, and their estates included much of what is now Hove. Around 1500 the bishops began to rent out the property to tenants, but in 1561 Elizabeth I forced the Bishop to exchange Preston for property elsewhere. In 1628 the estate was purchased outright from the crown by Thomas Shirley, whose family had been renting since 1510.

The Shirleys held the manor until the death of Richard Shirley in 1705. The manor then passed through marriage to the Weston family, and in 1794 it was purchased by one of their tenant farmers, William Stanford, for the princely sum of 17,600 pounds. Stanford rose to become High Sheriff of Sussex, and the house stayed in the Stanford family for 150 years. Since the last owners died in 1932 the house has been operated by the local council as a heritage museum.

By the early 17th century Preston was a simple manor house built around two courtyards. Then in 1738, Thomas Weston decided that he needed a new and much grander residence. He had the old mansion pulled down and replaced by a Georgian villa on four floors. In 1750 a pair of wings were added to the central block to create a fashionable Palladian facade. The house remained essentially unaltered until a mock-Tudor tower was added in 1880.

The tower - of which only the base remains - was a tribute to Anne of Cleves, who was said to have stayed at Preston briefly before retreating to live at the nearby convent of Falmer. A final transformation took place in 1905 when architect Charles Peach adapted the house for Ellen Thomas-Stanford to make it more suitable for entertaining. And this the Stanfords did in style, drawing famous and influential visitors to Preston Manor for house parties in the halcyon years leading up to WWI. 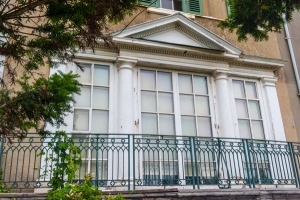 The manor is furnished in the style of the Edwardian period, with over 20 beautifully furnished rooms to visit including reception rooms, bedrooms, kitchen and servant's quarters, and a children's nursery. Outside the house is a walled garden, and nearby is the redundant church of St Peter, cared for by the Churches Conservation Trust.

Tales of hauntings cling to Preston Manor, and ghostly sightings have been reported for centuries. The Stanford family were repeatedly troubled by sightings of a mysterious Lady in White, while a spectral figure in grey would appear on the stairs and disappear just as quickly. Guests have reported unexplained phenomena, such as disembodied hands and lights turning on and off without explanation.

Not convinced? Well, in 1896 a medium named Ada Freer held a seance at Preston Manor after the family reported strange events, including sightings of mysterious figures. The medium reported contact with the spirit of a nun called Sister Agnes who had been wrongly excommunicated and buried in unconsecrated ground outside the house.

The spirit said that if her body was given a Christian burial she could rest at peace. About a year later there was a strange outbreak of illness. The drains were investigated and the skeleton of a woman found under the terrace. The skeleton was examined and declared to be about 400 years old (giving a death date of around the year 1500 AD). The local gravedigger seems to have reburied the skeleton, and no more ghostly sightings were experienced by the family. There are regular Ghost Tours for those who are brave enough! 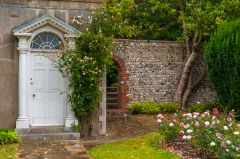 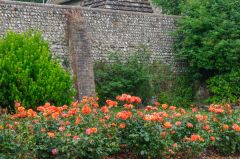 More self catering near Preston Manor >>