HERITAGE HIGHLIGHTS:   The mausoleum of eccentric Mad Jack Fuller, in the shape of a pyramid, stands in the churchyard. 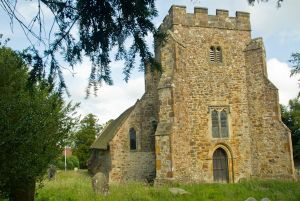 The church of St Thomas a Becket at Brightling stands on a shelf of high ground beside the manor of Brightling Park. The church is composed of a west tower, nave, north aisle, chancel and north chapel. The oldest sections of the building date from the 13th century (chancel, nave, and chapel), but the upper sections of the embattled tower are 14th century.

The chancel is lit by a pair of 14th-century windows. The priest's door boasts the arms of William of Wykeham, rector of Brightling in 1362. Wykeham was one of the most influential men of the medieval period, who eventually rose to become Bishop of Winchester and founder of New College, Oxford, and Winchester College.

You enter the church through the Norman south door (the porch itself is 18th century). Beside the door is a holy water stoup dating to the 13th century. The chancel and nave are barrel-vaulted, with 14th and 15th-century timber rafters. At the west end of the nave is an 18th-century gallery on fluted columns, supporting a barrel organ. This is thought to be the largest barrel organ in Britain still in full working order.

The organ and gallery were donated by local squire John 'Mad Jack' Fuller (1757-1834), whose memorial is set against the south wall of the nave.

Fuller is easily Brightling's most famous resident; a notable eccentric, he was responsible for building a series of peculiar follies around the village. Perhaps his most unusual creation can be found in the churchyard; it is his own mausoleum, in the shape of an Egyptian pyramid, modelled after the Tomb of Cestius in Rome. Fuller was long rumoured to be buried within the pyramid in a sitting position, his corpse holding aloft a glass of claret, but this tale is no longer thought to be true.

The church was originally dedicated to St Nicholas but was rededicated to St Thomas a Becket shortly after Becket's murder in 1170. On the south wall of the nave is a list of rectors of Brightling dating all the way back to 1070.

In the north aisle are surviving sections of intriguing wall paintings, a mixture of Biblical text and religious symbols. These span the period from the late 14th to early 18th century. One section of scrollwork leading to a  likeness of a building may date to the 14th century, while a trellis design is probably 15th-century work.

There are several intriguing memorial brasses within the church, including that of Thomas Pye (d. 1592), with a suitably pious kneeling figure of the deceased surrounded by inscriptions in both Latin and English verse.

There's a lot of historical interest at Brightling church, and the excellent church guide is well worth a purchase to get the most out of a visit.

More self catering near Brightling, St Thomas a Becket Church >>