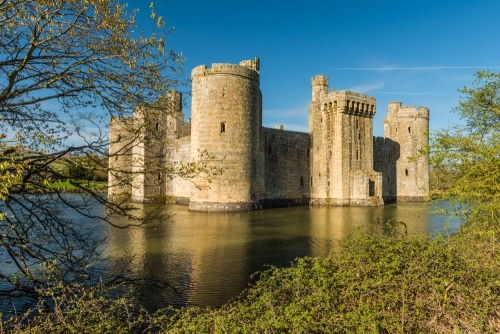 Bodiam Castle looks almost too romantic to be true. This fairytale castle was begun in 1385 by Sir Edward Dalyngrigge to discourage French raids. The picture book design is emphasized by the castle's moat and its crenellated battlements. Bodiam is reached by no less than three drawbridges and a barbican.

There was a Saxon hall on this site before the Norman Conquest. After the Normans took over the hall passed to the Bodeham family. For several centuries the Bodeham's lived on in the Saxon hall, much strengthened and expanded.

The French raided nearby Winchelsea in 1380, so when a new French invasion threatened in 1385 Sir Edward Dalyngrigge (or Dalingridge) applied to King Richard II for a license to crenellate and strengthen the existing hall. The license was granted, but Sir Edward decided to build a new fortress rather than fortify the old. This new castle he located near the River Rother, where the greatest possibility of French incursion threatened. The castle he built is essentially the one we can visit today. 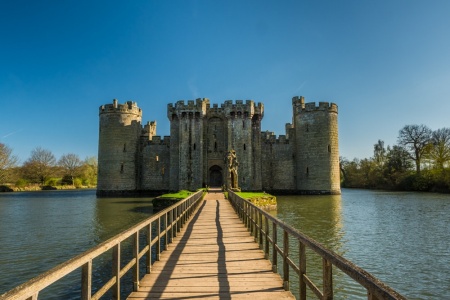 The causeway and castle moat

Though its primary aim was defence, Dalyngrigge made sure that Bodiam was also a comfortable abode, as much a fortified residence as a military stronghold. He built in grand style, creating at the same time a deterrent and a personal statement of wealth and power.

Bodiam was built to a simple rectangular plan with great drum towers at the corners, but this was complemented by the series of drawbridges built at angles to each other, and a massive barbican, forcing a potential adversary to overcome each defence in turn.

The interior design of Bodiam is no less intriguing than the exterior defences; Dalyngrigge knew that he would have to rely on essentially unreliable mercenary troops to man his fortress. So he built a completely self-contained retainer's hall and left both entrances and three of the four angle towers in direct control of the lord and his family. Thus Bodiam was defended from within and without!

The French invasion never took place, and Bodiam's impressive defences were never tested until 1484 when the castle fell to a siege by Richard III. Later, during the English Civil War, Bodiam fell to an assault led by the Parliamentary general, Sir William Waller.

Bodiam was "slighted" by Parliamentary forces after the Civil War, and the interior was made uninhabitable. It crumbled on for several centuries until it was acquired by the Marquis of Curzon in 1917. Curzon began a process of restoration, and the castle passed to the National Trust on his death in 1925. 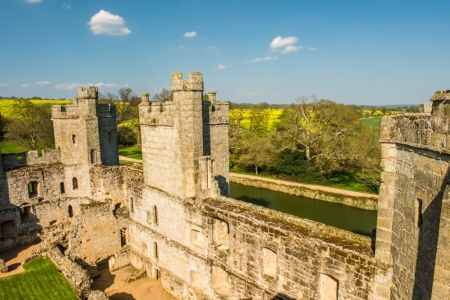 The view from the Postern Tower

See our article on Bodiam Castle history, and while you are there don't overlook the fascinating little parish church of St Giles, located just up the hill from the castle, where you will find some excellent medieval brasses.

While I could go on and on about what a fascinating historical site this is (and it truly is!), my best tip for visiting is to take the regular boat hire service from nearby Newenden. This departs from the bridge on the A28 and takes a wonderfully relaxed 45 minutes to get to the castle.

The experience is terrific; the boat captain let our children each have a turn as the pilot, and they loved it. The cost is extremely reasonable, and you get plenty of time to explore the castle before heading back up the river for the return journey.

If you prefer to arrive by car there is a large National Trust pay and display parking area and visitor centre just outside the castle grounds. From there a broad footpath leads up a slight incline to the castle, passing as it does a World War Two fortification in the grounds.

It is a little jarring to see the 20th-century brick defences sharing space with the picturesque medieval castle, but, then again, Sir Edward Dalyngrigge built Bodiam Castle for defence, so maybe he would approve!

Defending the gatehouse is a large portcullis, made of oak with an iron covering. This is perhaps the oldest portcullis in England. Look up as you go through the gatehouse passage and you will see murder holes, made so that the defenders could fire crossbow bolts or pour unpleasant things like hot oil on attackers as they passed below. 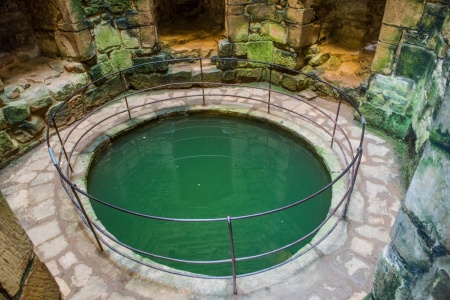 Once inside the castle walls you quickly realise that though the fortifications appear complete from the outside they are anything but complete inside. You can, however, climb up an internal stair to the parapet walk in several places, and ascend to the roof of the Postern Tower for wonderful views over the castle and the surrounding area.

You can also descend stairs to the huge well that served the castle inhabitants, located directly under a dovecot for raising pigeons, a staple of the medieval diet. The well water was not used for drinking - medieval folk were far too smart for that; they drank ale instead, even the smallest children. The well is about 10 feet deep and is fed by a natural spring mixed with water from the moat.

Immediately beside the well are the castle kitchens, with two large fireplaces, one incorporating a bread oven. From the kitchen, a passage leads to the Great Hall, the hub of castle life, where Sir Edward dined, entertained guests, and conducted business.

On the eastern side of the castle are the Lord and Lady's private apartments, and next to them is the chapel, with a large Gothic window admitting light.

The National Trust maintains an interpretive centre just opposite the causeway to the castle, where you can learn more about the history of Bodiam.

Our family have visited Bodiam Castle several times, and each time we come away enthralled. The setting is spectacular, and the fairytale appearance of the castle, set within its broad moat, is indescribably picturesque. 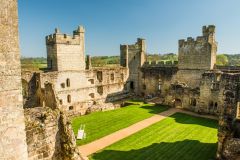 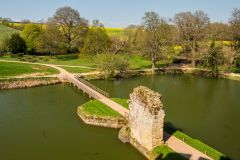 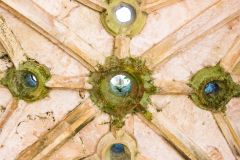 More self catering near Bodiam

More bed and breakfasts near Bodiam