HERITAGE HIGHLIGHTS:   The abbey was built on the site of the pivotal Battle of Hastings, and contains the traditional location of King Harold's death. 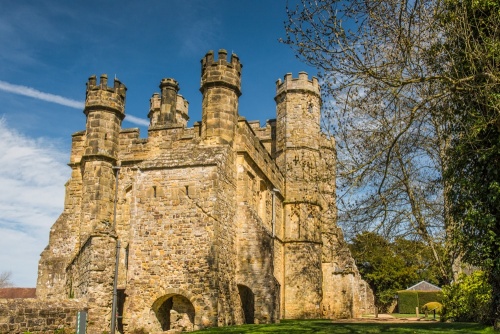 When William the Conqueror defeated King Harold's Saxons at the Battle of Hastings, he erected a magnificent abbey to mark the location of his triumph. The abbey is not, as you might reasonably expect, at Hastings itself, for the battle was not fought there, but at Senlac Hill, some miles inland. The mighty abbey founded by William became known as Battle Abbey, and the town of Battle grew up around it. 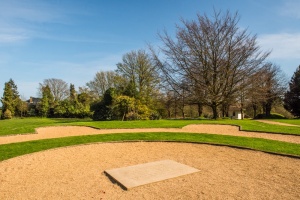 Oddly, we do not know exactly when Battle Abbey was founded; it was possibly in 1067, and certainly before 1070 when William invited monks of the Benedictine order to establish a monastery on the site of his great military success.

It seems likely that William's purpose was two-fold; to atone for the bloodshed (i.e. a 'spiritual' purpose), and to establish a permanent reminder of his triumph and power (a political purpose). The latter point is pretty clear when you consider that William insisted the high altar, the holiest place in the new abbey church, should stand on the exact spot where Harold's standard fell (to be picky, that's not necessarily where Harold actually died!).

William had a very clear vision of the abbey he founded. It would initially have 60 monks, with this number rising eventually to 140. His new abbey was to be generously endowed with estates, so generously endowed that it became one of the richest and most powerful monasteries in the country. Daughter houses of Battle included Brecon, Carmarthen, and St Nicholas (Exeter).

Construction began at once, and by 1076 the eastern end of the abbey church was finished and ready to be used. The entire church was not finished until 1094, long after William's death. In that year the church was consecrated by the Archbishop of Canterbury, assisted by seven bishops and watched by William II and his court.

As you can tell by the level of ceremony, this was an important event and signifies the high status of the abbey in the minds of the new Norman elite of England. The east end of the church was extended in the 13th century when a guest house was built to the south-east.

Though the abbey thrived during the Middle Ages it was, like other monastic houses, dissolved by Henry VIII, with the end coming in 1537. Henry VIII granted Battle Abbey to his friend and supporter, Sir Anthony Browne, who demolished most of the medieval buildings.

Browne created a large manor house from the west cloister range, incorporating bits of the abbot's lodging and frater. Browne's large estate included the battlefield and extensive abbey lands. Later in the 16th century, a courthouse was built onto the east side of the gatehouse. This courthouse remained in use until the 18th century. 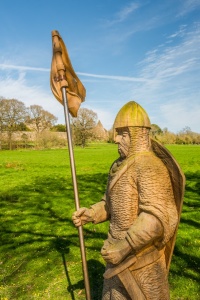 In 1721 the Battle estates passed to the Webster family. Over the next 250 years the Websters gradually sold off pieces of the estate, and the medieval buildings were allowed to decay. After WWI Browne's Tudor manor house was rented to Battle Abbey School, who still occupy it today. In 1976 the government purchased the estate, including the battlefield, from the Websters, and passed control to English Heritage.

Almost no visible remains of the battle here have been found, and the landscape shows no trace of the conflict. There were no great earthworks or siege engines in those days, so the impact on the battlefield site was minimal. But having said that, the topography of Senlac Hill has changed hardly at all over almost 1000 years, allowing modern visitors to trace the events of the battle with relative ease.

The site is huge - at 100 acres (roughly 40 hectares), with trails running across it. For a full account of the battle, the events leading up to it, and the consequences, see our Battle of Hastings article.

Very little remains of the great abbey church today, beyond the 13th-century extension to the east end. One feature to look for is a rather peculiar memorial on the site of the high altar, marking the traditional spot where King Harold fell. This rectangular stone plaque - known, not surprisingly - as The Harold Stone - is set into the earth on the traditional site of the high altar. 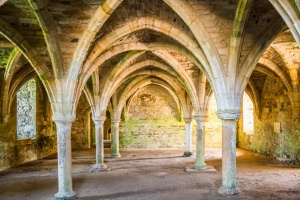 The monk's dormitory is in relatively good repair and features some extremely good vaulting. On the west of the cloister range are remains of the abbot's lodging and guest accommodation. Though much of these buildings are in ruins, sections of the guest house undercroft are in good condition, and again, the vaulting is wonderful.

The best-preserved part of the entire abbey site is the marvellous gatehouse, one of the best medieval gatehouses in England. Much of this striking structure is an early 14th-century rebuilding of the original Norman gatehouse. Permanent exhibitions on the history of the battle and the abbey are housed on the first floor.

English Heritage has gone to great lengths to appeal to families and children at Battle Abbey. There are special CGI exhibits to bring the Battle of Hastings to life and interactive displays to tell the story of the battle and its importance in English history. There is a free audio tour of the battlefield so you can trace the events of that momentous day in 1066.

You can walk around the perimeter of the battlefield, where information panels have been strategically placed to tell the story of that dramatic day. By following the battlefield trail you learn how the soldiers were arrayed, how the Normans attacked and were driven back, how Duke William rallied his troops by taking off his helmet to show that he was still alive, and how the Normans finally overcame the Saxon shield wall and won, not just the battle, but the kingdom as well.

When we visited on a sunny spring day the battlefield was covered in flowers, like a carpet of yellow and white blossoms amid lush green grass. It was sobering to think that in this peaceful spot a bloody battle took place so many years ago.

Just outside the abbey gatehouse is an iron ring in the pavement showing the location where medieval bear-baiting took place. From there you can follow a really quite good town trail laid out by the local historical society; look for their decorative plaques on buildings along the high street. I can also recommend Battle Museum, housed in The Almonry; a lovely timber-framed building.

There is a dedicated parking area immediately beside the abbey. The car park is pay and display, but Abbey visitors receive their parking fee back when they enter the abbey. The car park is well-signposted. Don't do what we did and accidentally park in the town car park further up High Street, which is also pay and display but does not entitle you to get your parking fee back! 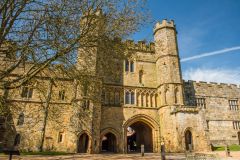 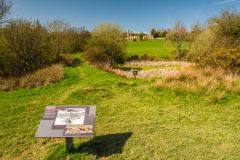 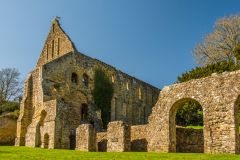 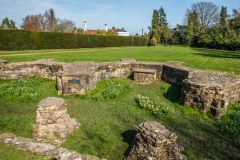 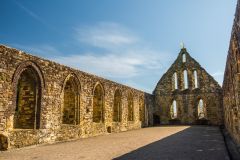 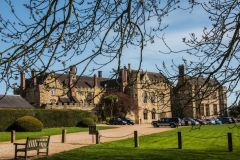 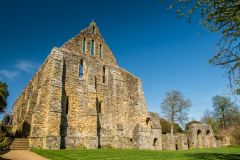 More self catering near Battle Abbey

Self Catering near Hastings