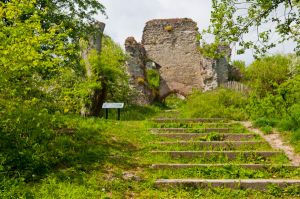 An 11th-century castle that later saw use as a prison, Wigmore is a striking medieval fortress in the Welsh Marches of Herefordshire, that lies buried up to one story deep by rubble and earth. Wigmore was built sometime in the 11th century, but who the builder was is a bit of a historical mystery. Tradition says that the castle was the work of a nobleman by the name of Eric the Wild. However, the Domesday Book of 1086 attributes the castle to William fitz Osbern.

Whoever the builder was, the result of that early construction was a motte and bailey fortress surrounded by an oval earthwork. From those humble beginnings, Wigmore Castle went on to become one of the most important fortresses in the Marches, and played a part in the drama of history for over 500 years.

The castle was owned by the powerful Mortimer family from 1075 to 1425, and during that time it played host to kings and queens on several occasions. It passed to the crown in 1425, and was later sold to Sir Thomas Harley.

When the Civil War broke out, Harley supported Parliament. They had not the men to defend both Wigmore and their manor at Brampton Ryan against Royalist attack, so they chose to defend the manor and demolish Wigmore so that it could not be used by Royalists troops. Their plans came to naught, as Brampton Bryan withstood one Royalist attack, but fell to a second, and was destroyed in 1644. 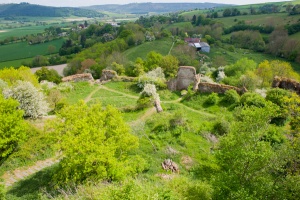 The view from the castle motte

The village of Wigmore was created as a borough, centred around the crossroads below the castle. It expanded to become a market town under the Mortimers, but when they moved their administrative centre from Wigmore to Ludlow the town and the castle diminished in importance.

To this basic outline the Mortimers gradually added a series of additions, including the east tower (13th century) and grand gatehouse (13th and 14th centuries). The most famous of the Mortimers during this period was Roger Mortimer, 1st Earl of March.

Roger Mortimer and Queen Isabella deposed Edward II in 1327, and ruled the country on behalf of the young prince, Edward. In 1329 Mortimer entertained Isabella and Prince Edward at Wigmore, but in the following year Edward threw off his shackles and seized the throne for himself. Mortimer was imprisoned and later executed.

The castle stands on a spur of land, and the naturally strong defensive position was enhanced by a series of deep ditches across the spur. There are three main sections to the castle. First, the outer bailey, which housed ancillary buildings such as stables and grain stores. Second, the inner bailey offered the primary residential quarters. Lastly came a stone shell keep, with a tall tower set upon a mound, or motte.

After the castle was slighted during the Civil War, it fell into decay, and the site filled with earth and rubble, to the extent that much of the lower floor of the castle is buried. Rather than excavate the remains, English Heritage have opted to let it retain much of its romantic, semi-wild state. 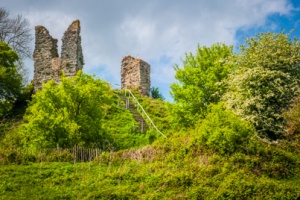 Ruins of the castle keep 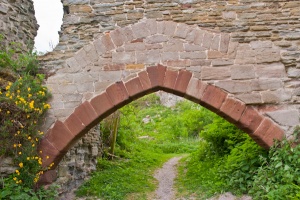 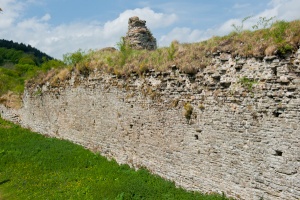 Ruins of the curtain wall 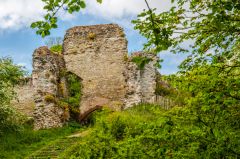 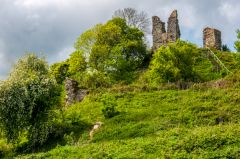 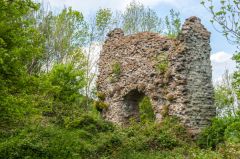 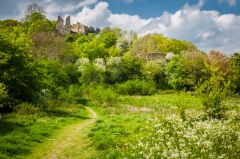 More self catering near Wigmore Castle >>