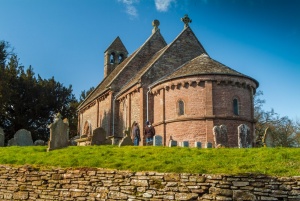 A simple Norman two-cell church with a rounded apse. Kilpeck is famous for the wealth of ebullient carvings left by the 11th-century masons; there are dozens of amusing, grotesque, and intricate carvings around the doors, windows, and roof line of the church. One of the finest small Norman churches in Britain.

The church at Kilpeck is unusual for its rounded apse; this is not a common element in English parish churches, though not unique by any means. But it is the carvings that attract visitors to this tiny rural community.

The south door is quite exceptional, with a rounded arch and tympanum supported on intricately carved columns. The carving is exceptional both in variety and quality of the work. Even today most of the relief lines are sharp and crisp, but it is the sheer vitality of the carvings that takes your breath away.

I was lucky enough to come here when the sun was attempting to shine, adding a bit of contrasting light to the church exterior, and the effect was breathtaking. 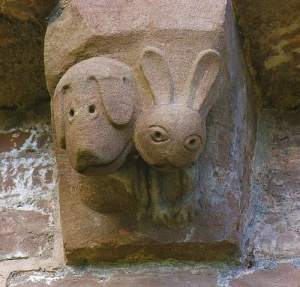 As you examine the carvings closely it is easy to note the similarity with earlier Celtic design; the figures are interwoven in a pattern reminiscent of Celtic style, and with more than a hint of pagan tradition. Above the door, hugging the roofline of the church, is a series of bosses that run the entire perimeter of the church.

Each boss is carved with a unique figure. A few are intricate patterns of lines, but most are heads of animals and people. Some are humorous - note the examples in the photos below - some are even upside-down! Some are grotesque. A few are engaged in activities; one man is playing a bowed musical instrument, others are merely grimacing.

The church interior is simple, with some further carvings, though nothing so exceptional as the exterior. The font is a simple bowl, supported on four pillars. In a north window is a carved stone font-stopper.

By the pulpit is a very unusual Norman water stoup, with carved hands clasping the container, which is now used as a flower pot. The eastern apse is beautifully formed, with whitewashed walls and curving vault columns in stone.

One thing that is easy to overlook is that Kilpeck church is part of a much larger Norman complex including a castle and defensive enclosure. The extension of the church graveyard to the south west stands within the castle bailey, and though little of the castle itself can be discerned, the earthwork defences are readily apparent.

This photo guide is pretty long, but even then it does not include every single carved figure adorning Kilpeck church - but I've got most of them! Really, the detail in the carvings is quite extraordinary, but it is the sheer variety of design that is most appealing. Many are quite humourous, some are quite touching. I can highly recommend a visit to Kilpeck.

The same masons who worked on Kilpeck were also responsible for a series of other churches in Herefordshire, though none quite so extraordinary as this. See a selection in our Historic Churches of Herefordshire guide. 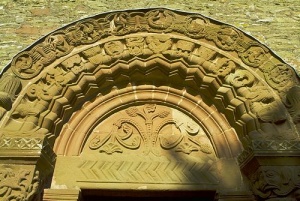 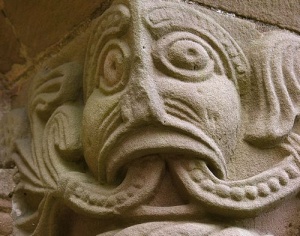 Carving around the door 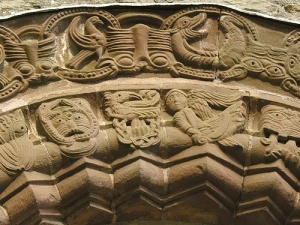 Detail of the tympanum 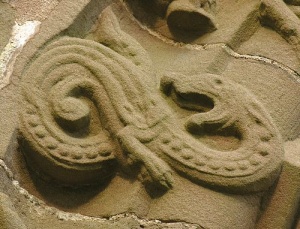 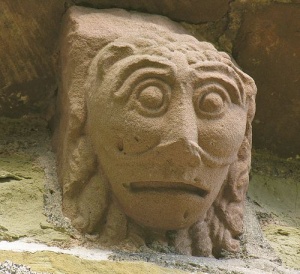 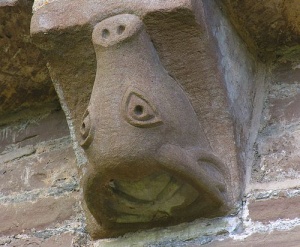 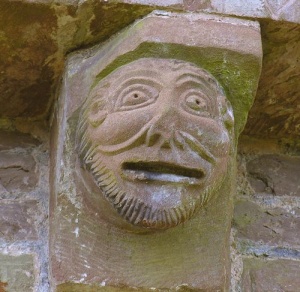 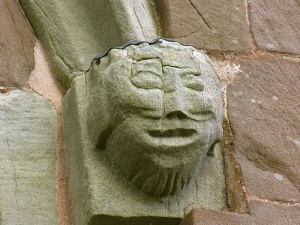 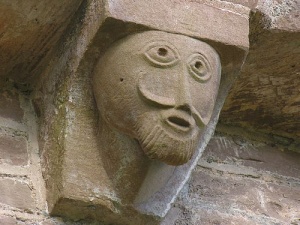 More self catering near Kilpeck

More bed and breakfasts near Kilpeck