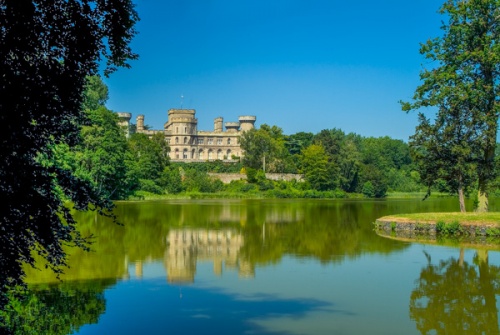 Eastnor Castle is one of those British anomalies - something new pretending to be something old. It was begun in 1811 by the 2nd Lord Somers (later Earl Somers) to provide a home more suited to his elevated status as a peer of the realm.

Some background is in order. The Cocks family had been landowners in Herefordshire since the 16th century. Under George III, Charles Cocks was created the 1st Lord Somers, the title referring to his descent from a sister of William III's Lord Chancellor.

The first Lord Somers seems to have been quite content with his old family home, but his son had grander ideas. In 1811 the 2nd Lord Somers commissioned the architect Robert Smirke (also known for his design of the British Museum in London) to create a castle in the style we now call Norman Revival style. 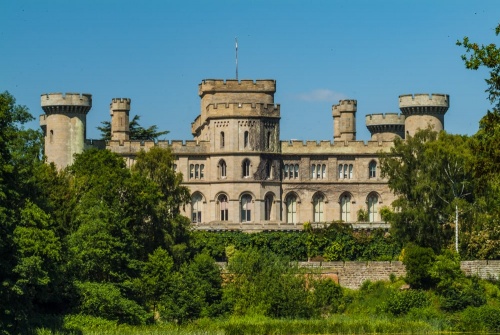 The castle from the grounds

So great was the scale of Eastnor, so massive its walls, that well before it was finished it was one of the county's biggest tourist attractions. People came from far and wide to gape at the huge walls rising up.

The 11th Duke of Norfolk, who might be accounted an expert in the matter of creating mock castles, having himself almost finished Arundel by that time, declared critically that the timber bracing in the walls would rot. The braces, however, were a temporary measure, introduced by Smirke only because Lord Somers was so desperate to finish Eastnor as quickly as possible. When the walls were up, the braces were removed. 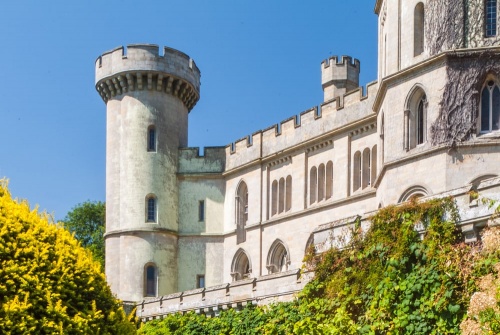 Then Lady Somers took a hand, suddenly deciding that the dining room was too far from the kitchen (probably true, for such things were seldom considered in building design, and diners were used to having their hot dishes arrive cold to the table). The plans were altered to suit her wishes.

Then the Somers' declared that the west wing must be finished first, so they could move in as soon as possible. One trusts that Mr Smirke was being well paid for his aggravation!

The west wing was duly completed, and the family moved in and demolished their old home. At that point, work slowed down, and it was not until 1821 that the building was completed (under budget - modern builders take note!). However, the project had depleted Lord Somers' funds, and the main rooms were left bare. 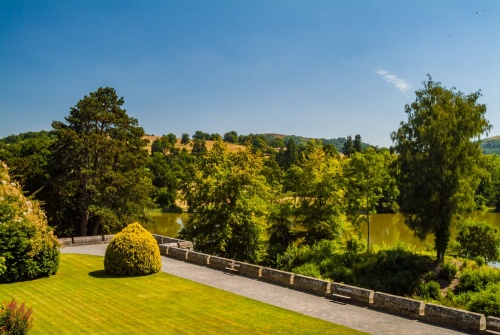 Looking out over the lake

The interior was finally finished by the 2nd and 3rd Earl Somers (the lordship became an earldom in 1822). Pugin, responsible for the extravagant House of Lords, was hired to furnish the drawing room, which he did in his typically exuberant Gothic style.

The Great Hall was filled with an extraordinary collection of armour, and George Fox added the frescoes in the Great Hall. While Fox was staying at Eastnor, his tower quarters were dubbed by the servants the "fox's den".

The earldom of Somers lapsed when the 3rd Earl died in 1883. Eastnor went to Lady Henry Somerset, the late Earl's eldest daughter. Lady Somerset was infamous for having left her husband on the grounds that he was a homosexual.

Lord Somerset was, predictably, forced to live abroad after the accusation surfaced, but he was not the only one to suffer; Lady Somerset herself was ostracized by Victorian High Society. It seems that proper ladies did not know about "unnatural behaviour" (or if they did know they were supposed to have the good taste not to acknowledge it), and they certainly did not make public statements about it. 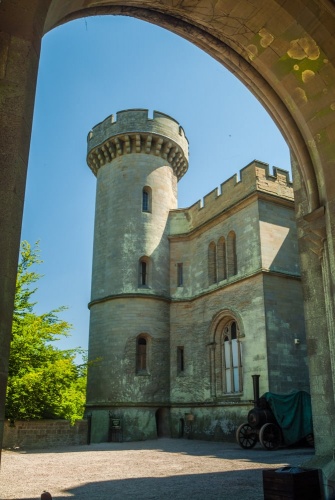 The view from the porte-cochere

So Lady Somerset, cut adrift from social life, turned to good works and became a strident temperance advocate. To raise funds for her worthy causes, she opened Eastnor to the public. She even took a hand in writing the guidebook.

The house itself, if such a large structure can really be called a house, is built with a symmetrical central block and corner towers. The west wing is given over to family quarters.

There is a series of showrooms on display, including the huge Great Hall (60 ft high ceiling) with its armour collection, the drawing room by Pugin, the library by George Fox (note the Flemish tapestries - they were originally ordered by Catherine de' Medici), the dining room, and the state bedrooms. Throughout the house, there is an excellent collection of art, including an outstanding group of family portraits. 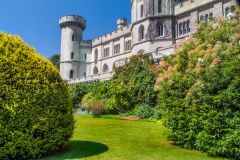 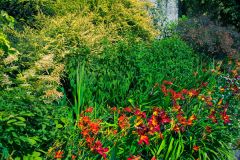 More self catering near Eastnor Castle