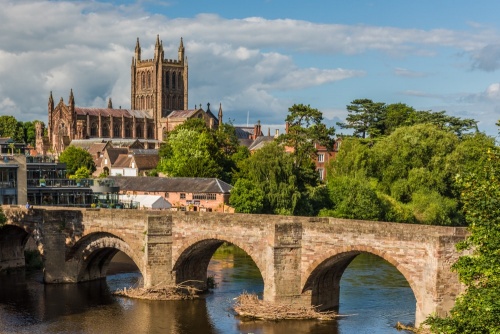 The roots of the history of Hereford are Saxon, and indeed fragments of the original Saxon city walls can still be seen. The city received its first charter from King Richard I in 1189, but the city has had a troubled history since then, due to its strategic location on the English border with Wales. 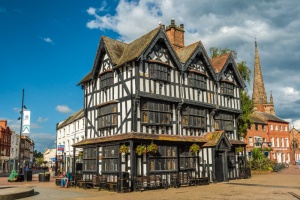 For over a millennium, Hereford has been the subject of raids, sieges, and counter-raids, culminating in the turbulent years of the English Civil War, when Hereford changed hands no less than 4 times in 3 years.

Herefordshire is a primarily rural county, blessed with broad, open pastures and green hills. Apart from the cattle and cider industries, Herefordshire is home to some of the loveliest examples of half-timbered Tudor and Jacobean buildings anywhere in Britain.

Nowhere is this more evident than in Hereford itself. The Black and White House in Hereford is a delightful Jacobean half-timbered house built in 1621. The house is furnished in 17th-century style on 3 floors, including the kitchen and children's rooms.

Moving back in time from Black and White House, the Coningsby Hospital Medieval Museum on Widemarsh Street is a museum on the site of a 13th-century Dominican friary. The museum highlights the history of the chivalric knightly Order of St John. In the garden is the only surviving open-air preaching cross in the country. 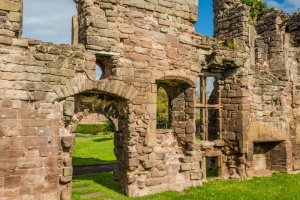 Though these attractions are interesting, it is the Cathedral that draws most visitors to Hereford. The Cathedral was begun in the 11th century, and it contains superb Gothic architectural detail.

The prize possession of the Cathedral is the Mappa Mundi, dating from the 13th century - one of the very earliest maps still in existence. The Mappa Mundi is contained in Hereford Cathedral's world-famous Chained Library, which houses over 1500 volumes dating all the way back to the 8th century.

During the medieval period, books were so valuable that they were chained and locked to prevent them from "disappearing". Hereford's Chained Library is the largest in the world to survive completely intact.

For a break from architecture and books, why not sample a little cider? The Cider Museum and King Offa Distillery on Whitecross Road traces the history of traditional cider in Herefordshire in a fascinating display that features a huge 17th-century beam press and a recreation of a Farm Cider House. You can watch cider being made, and sample the end product, including cider brandy (it is strong stuff - be warned!).

For an introduction to Hereford, you can take in a guided city walk. These walks depart daily between May and September from the Shirehall forecourt and last from 1 to 1 1/2 hours.

More self catering near Hereford

More bed and breakfasts near Hereford