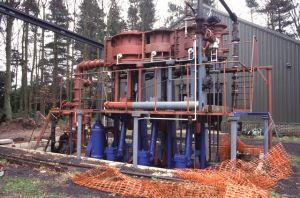 The main pump building houses two beam engines built by the firm of James Watt and Company, thought to be the final two engines produced by the famous engine manufacturers.

The beam engines raised water from a 200 foot deep well and pumped it into the main reservoir supplying Nottingham at a rate of up to 1.5 million gallons of water per day per engine. The engines were fed by 6 large Lancashire boilers, which had to be constantly stoked by workmen.

The boilers were hungry beasts, requiring up to 5.25 tons of coal per day when pumping. The engines were in operation until 1969, when they were replaced by electric pumps. The works were restored in 1974 and opened to the public the following year.

Apart from the ornate interiors and the original beam engines, visitors can view a selection of steam engines brought here from other sites.

There are special events throughout the year, including miniature steam train rides, model boat and yacht sailing, and local crafts.