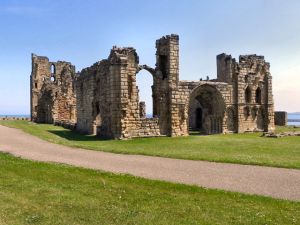 Tynemouth Castle and Priory
Tynemouth Priory and Castle is a complex of historic buildings that have been in use since at least the Iron Age period. The appeal of the site is its position on an isolated headland situated between the River Tyne and the sea. There was a native settlement here during the Roman period, and in the 7th century a monastery was established on the site, and Oswin, Northumbrian king and saint, is supposed to have been buried here.

That first monastery was destroyed in a Danish raid, and a new monastery based on the Benedictine rule was established in about 1090.

The monastery lasted until it was dissolved by Henry VIII. The east end of the priory church, built around AD 1200, is the most imposing of the priory remains; it stands almost to its full height. The 15th-century chapel, built as a chantry for the Percy family, Earls of Northumberland, is very well preserved and features a complete rose window and decorative vaulting.

The entire priory complex is surrounded by defensive walls. The first defences at Tynemouth were probably begun by Edward I around 1296. Edward's walls were strengthened in the 15th century. Then, after the dissolution of the priory in 1539, the site was transformed into a royal castle and gun emplacements built to counter the threat of Spanish invasion.

Tynemouth Castle was a major part of England's coastal defences for the next several centuries, and visitors can still see the restored gun battery built during the Napoleonic Wars.

It is rare to see a site that has been put to so many purposes over the centuries, and Tynemouth Priory is well worth a visit for its historic interest.

More self catering near Tynemouth Castle and Priory >>

More bed and breakfasts near Tynemouth Castle and Priory >> 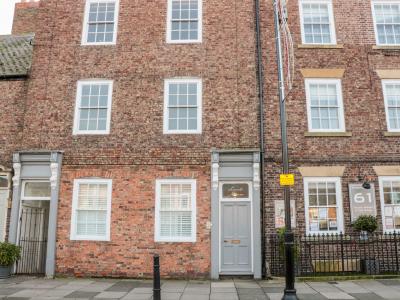