HERITAGE HIGHLIGHTS:   13th-century effigies of a knight and his lady 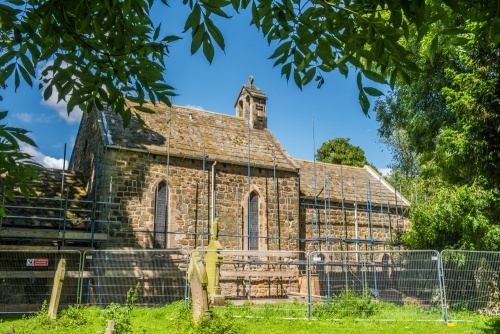 The Church of Our Lady in Seaton Delaval is a delightful 12th-century church tucked away beside the Baroque splendour of Seaton Delaval Hall, designed by Sir John Vanbrugh, the architect of Blenheim Palace.

One of the Norman knights who supported William the Conqueror in his conquest of England in 1066 was Hubert de la Val. After William's success, he granted estates across his new realm to those knights who had fought with him.

One of those knights rewarded with property was Sir Hubert, who was given land in the north-east of England. Hubert de la Val probably built the first church at what is now Seaton Delaval. The church was dedicated to Our Lady in 1102 and was not a parish church but a private chapel for the Delaval family. It served as the family's chapel for over 700 years before they gave it to the Church of England in 1891.

Sir Hubert's church was rebuilt in the 12th century to give us the small, unobtrusive building we see today, composed of a short but tall nave, low chancel and west porch. Parts of the earlier 11th-century church were incorporated into the 12th-century structure.

Above the west door is a beautiful piece of tracery originally made for the 14th century east window. The tracery was carved from a single block of stone. When the east window was restored in 1861 the 14th-century section was discarded and lay in the churchyard until 1892 when it was rescued and placed over the door. 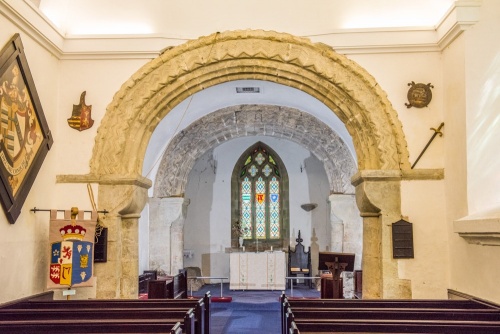 The church interior and Norman arches

Over the inner door is a worn tympanum set beneath three stone shields. The central shield depicts the royal lion and it is flanked by Delaval coats of arms. Just inside the west door is an ancient font in a chalice shape. This is probably late Saxon or very early Norman.

The nave measures just 25 feet long and 20 feet wide. It is separated from the chancel by an exceptional pair of Norman arches decorated with chevron and zigzag carvings. In the north wall is a small Norman window, now blocked.

The stonework on this wall suggests that there may have been a pre-Norman church on this site before the present building. In the sanctuary is a small, plain 12th-century piscina.

To the right of the nave arch is a sword and shield made of wood made to commemorate the passing of Sir Francis Blake Delaval. These pieces of ceremonial funeral regalia were placed on top of a knight's coffin.

On the opposite (north) side of the arch is a very small ceremonial wooden shield used in mock jousting competitions to entertain guests at Seaton Delaval Hall. It is painted with the arms of the Grey family of Gillingham Castle. 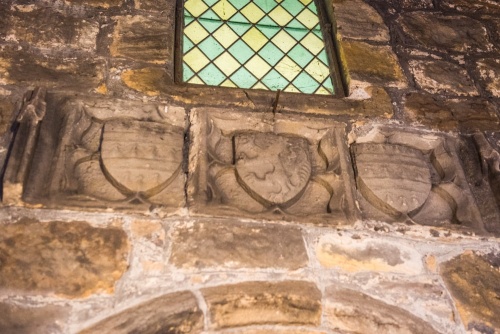 Armorial shields over the west door

In a rather odd juxtaposition with the Norman features, the nave roof is decorated in elegant Georgian style. The rest of the church is plain and sparsely furnished.

Six funeral hatchments hang upon the walls. These hatchments were painted to signify the death of a family member and after hanging outside the family home for a period they were brought inside the church. There are only 50 hatchments surviving in all of Northumberland and six are here at Seaton Delaval.

The Delaval family's connection to the church is everywhere to see. Family coats of arms adorn the walls along with memorials spanning the centuries. One coat of arms bears the inscription 'Magna Charta', a reminder that Gilbert de la Val was one of those powerful barons who forced King John to sign the Magna Carta at Runnymede, Surrey, in 1215.

Clause 61 of the Magna Carta set up a commission of 25 barons to monitor King John's behaviour and ensure that he followed the terms of the charter. These 25 powerful men were known as the Surety Barons. They were supported by another 200 nobles who were present at Runnymede, among them Gilbert de la Val. 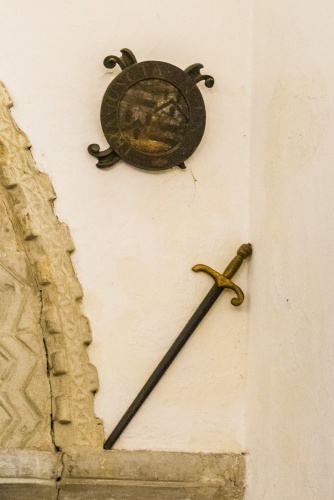 The most interesting tomb inside Seaton Delaval Church is that of a medieval knight and his lady. The knight is traditionally said to have been a crusader, though it is not known which Delaval he was. The effigies originally stood before the Delaval family vault.

One fascinating tomb is not visible; in the crypt is the tomb of Sir Alexander Ruthven, who died in 1722. The curious thing is that no one seems to know anything about Sir Alexander or why he was buried in the Delaval family vault.

One suggestion is that he was a Jacobite still in hiding seven years after the failure of the 1715 Jacobite rebellion. Another theory is that he was a lover of one of the Delaval ladies, but there is no record of anyone named Sir Alexander Ruthven. So who was the mysterious dead man?

In 2013 archaeologists working at Seaton Delaval Church discovered a shallow grave with the skeleton of a woman thought to have been buried 900 years ago.

The church is extremely easy to find. It stands in the grounds of Seaton Delaval Hall, off the A190 between Seaton Sluice and Seaton Delaval village. 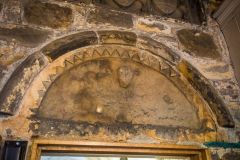 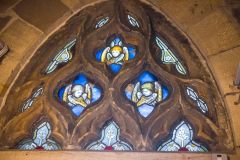 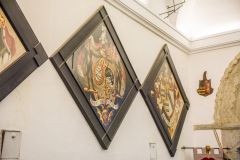 More self catering near Seaton Delaval, Our Lady Church

More bed and breakfasts near Seaton Delaval, Our Lady Church