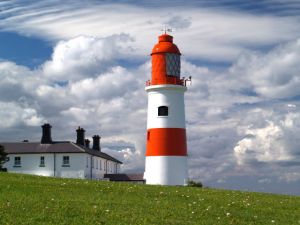 Souter Lighthouse
A historic 19th-century lighthouse overlooking a 2 mile stretch of beach, grasslands, and cliffs. Souter Lighthouse was the first electrically powered lighthouse in the world and was built to ease passage for ships entering the Wear. Climb the 76 steps to the top of the tower for excellent views out to sea.

The red and white striped lighthouse was built in 1871 by Sir James Douglas and pioneered the use of AC (alternating current) power. Visitors can access the engine room, living quarters, and the light tower, while a special exhibit in the Compass Room has displays covering the history of the lighthouse and the seafaring heritage of the area. You will lean about life at sea, how ships communicate with the land, smuggling, shipwrecks, and pirates.

To the south of the Souter Lighthouse is Whitburn Coastal Park, leading to the Whitburn Point Local Nature Reserve.

More self catering near Souter Lighthouse >>