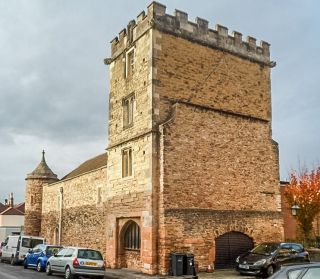 Westbury College Gatehouse
Westbury College Gatehouse is a 15th-century gatehouse that once controlled access to a College of Priests; a residence for the Dean and canons of nearby Holy Trinity church.  The College predated the gatehouse by several centuries, and it is known that the theologian and social reformer John Wycliffe was a prebend at the College in the 14th century.

The gatehouse served as the main entrance into a complex of buildings based around a quadrangle. The gatehouse was built from 1459-1469 by John Carpenter, the Bishop of Bath and Wells as part of his ambitious plan to extend the earlier college.

After the Reformation, the College buildings were converted into a residence by Sir Ralph Sadler, but that residence was slighted by Prince Rupert in the Civil War to prevent it being used by Parliamentarian troops.

In the late 18th century a Georgian house was built beside the gatehouse, and the only surviving parts of the original medieval college buildings are a pair of round towers and a section of wall visible on Trym Road and College Road.

The gateway stands 4 stories high, and the arch is vaulted in two bays. The gatehouse is topped with a parapet and corner turrets.

The gatehouse passed to the National Trust in 1907 but is leased to Holy Trinity Church for use as a meeting place. Regular opening hours, but arrangement must be made in advance to collect the key from the Parish Office nearby.