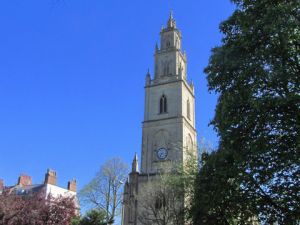 Bristol, St Paul's Church
St Paul's is a late 18th-century church set in a Georgian square in the heart of Bristol. The church was built from 1789-1795 by architect Daniel Hague and is popularly known as 'The Wedding Cake Church' for the way the stages of its striking tower stack up like a traditional wedding cake.

The unusual design was not the original plan for the church. The church authorities first accepted a subdued design in classical Greek style by James Allen. However, they were persuaded (it isn't clear by who) to abandon the sober design in favour of the eccentric design put forward by Hague, who was developing the rest of the square. Apparently, local people were convinced that the design was actually put forward by the vicar of the time, and merely executed by Hague, who was a mason by trade.

The style is decidedly Gothick, and the interiors feature beautiful Georgian plasterwork decoration, particularly in the nave ceiling and around the chancel arch. The stained glass is outstanding, as are the stone columns and 18th-century plasterwork detail.

There are a number of impressive memorials, including a very grandiose monument to Col. Spener Vassall (d. 1807) by John Flaxman, a leading British sculptor in neoclassical style. Colonel Vassall served with the 38th Foot and was fatally wounded at the siege of Montevideo.

He was buried where he died, but his body was later dug up and brought back to Bristol for burial in the family vault. The memorial was erected by his widow Catherine, with an epitaph written by Amelia Opie.

The church looks peaceful now, but a tragic and deadly tale is linked to it. In 1848 the wife and children of a builder named TW Hill died and were buried in the churchyard. Mr Hill had life insurance on his wife and was paid £3000 by the insurance company.

The authorities were suspicious, however, and in the following year, the corpses were exhumed. An inquest found that they had been poisoned with arsenic. Mr Hill, aware that his murders would be discovered, committed suicide by taking prussic acid.

St Paul's is now cared for by the Churches Conservation Trust and is open most days. Since 2005 it has been run as a partnership between the Trust and the Circomedia circus school. The historic interior has been transformed into a space for aspiring circus performers to learn their craft with state-of-the-art trapeze and aerial equipment. The church is usually open daily during normal working hours.