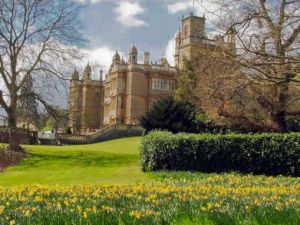 Englefield House
Englefield House is a superb Elizabethan mansion, with 18th and 19th-century remodelling. The house is built loosely on the traditional Elizabethan E-plan, though there is much asymmetry about the design. No one seems sure quite when the house was built, but it is likely that the house actually predates the Elizabethan period.

Sir Francis's son purchased a new residence at Whiteknights Park, which is now part of the University of Reading. After some legal wrangling, Englefield was given to Elizabeth's favourite, Rober Devereux, Earl of Essex. It is probably due to Essex that the house was enlarged and expanded to form the building we see today.

The house later passed to the Paulet (or Powlett) family, Marquesses of Winchester. One 17th century Powlett, Lord Francis, earned a measure of notoriety by marrying his kitchen maid.

Englefield was immortalized in a famous painting by John Constable in 1832. The house is set in 19th-century formal gardens, with a deer park (one of the last surviving examples in Berkshire), kitchen gardens, water garden, and several smaller garden areas in addition to a woodland garden created in the 1930s.

The gardens are open all year, but as of this writing, the house is only open to pre-booked group tours.

More self catering near Englefield House >>