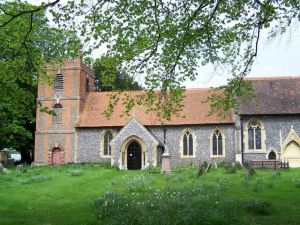 Lower Basildon, St Bartholomew's Church
A lovely medieval church beside the River Thames, St Bartholomew's dates to the late 13th or early 14th century, with the addition of a neo-classical early 18th-century tower built of brick.

The most interesting historical feature is a 14th-century tomb niche, originally built for the founder of the church, but later used for the tomb of Sir Francis Sykes (d. 1804).

Also within the church is a memorial to the agricultural reformer Jethro Tull (d. 1741) - not to be confused with the 20th-century rock band of the same name!

The original Tull tried to reform antiquated methods of agriculture and invented a new form of plough and methods of sowing seeds. His ideas were viewed with much suspicion by farm workers, who thought their jobs would be threatened by the innovations.

Tull's modern gravestone stands in the churchyard. It is dated 1740, even though Tull died in 1741. The oddity is explained by the difference between the Old Style Julian calendar and the modern convention of using the Gregorian method of calculating dates from 1 January.