HERITAGE HIGHLIGHTS:   The most unaltered Roman city site in Britain 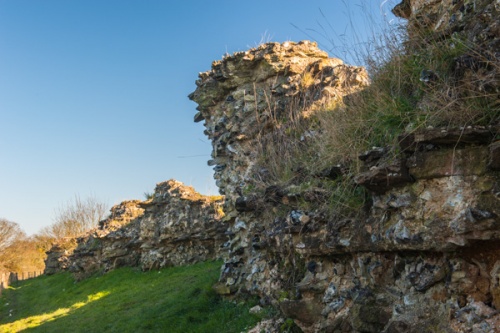 Silchester was settled as early as the late Iron Age when it was an important tribal centre for the native Atrebates. When the Romans settled in Britain, they reused the settlement site to create a new town called Calleva Attrebatum (loosely translated as Town in the woods of the Atrebattes).

Sections of Iron Age earthwork ditches and banks can still be seen outside the Roman walls. Pre-Roman coins suggest that the Attrebates settlement was founded by Commius, a Gallic chief who fought against Julius Caesar in Gaul around 50 BC and later escaped to Britain.

Under the Romans Calleva Attrebatum became a civitas, or regional capital. The buildings in the centre of Calleva were of stone and included a forum and basilica. However, buildings further out from the centre were probably still built of wood. The town suffered a fire in the late 3rd century which razed most of the buildings. It was quickly rebuilt and continued to flourish until it was eventually abandoned sometime in the 5th or 6th centuries.

Why is it important?

What makes Silchester Roman Town so unique is that it was never reused or resettled after the departure of the Romans. Therefore it provides a remarkably unaltered example of a Roman town. The townsite is surrounded by a 3rd-century wall roughly 1.5 miles in length, one of the best-preserved original Roman town walls in Britain.

The walls are very substantial; they stand to over 12 feet high in places (about 4 metres). None of the buildings within the walls remains standing, though ongoing archaeological investigations illuminate the layout and nature of the settlement. 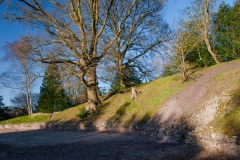 Just outside the town walls are the remains of a very large amphitheatre, which provided seating for between 4500 and 7500 spectators. The amphitheatre was begun between AD 50-70 and was constructed of wood. It is one of the earliest known amphitheatres in Britain.

The early structure was remodelled in stone sometime in the 3rd century. We do not know for certain what sorts of entertainments took place here, but records elsewhere suggest that common activities in amphitheatres included animal baiting (usually dogs, bulls, and bears), public executions, and gladiatorial combat.

This could simply have been an early form of a manor house, using the banks of the amphitheatre as defences. The amphitheatre was discovered by antiquarian William Stukeley in 1724. Stukeley is best known for his rather odd - to our modern thinking - theories about Avebury stone circle and ancient druids. 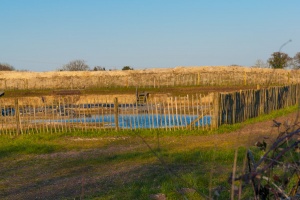 Calleva is in the process of excavation by archaeologists from the University of Reading, and visitors may view the excavations taking place from raised platforms. Pre-booked guided tours are also available.

Details of the excavations and a history of the site can be seen at the Reading University Silchester website. There are also two free open days during the digging season when visitors can take guided tours, see finds, and try their hand at digging.

Well, I finally got a chance to visit Silchester and all I can say is 'wow!' The striking thing about the site is not any wealth of foundation walls or standing remains; there are no obvious buildings within the city walls. No, the amazing thing about Silchester is the sheer scale of the site. As my wife and I walked along the walls I kept stopping to take in the distance between the wall I was on and the distant wall on the opposite side of the site.

The site is part of the Silchester Trail, an 8-mile circular walk from Silchester village, around the Roman walls, and back. A shorter alternative version of the signposted trail just follows the Roman walls and is about 3-4 miles long. There are very useful information panels at various points along the trail, but in a few places the signs are absent and it may be awkward trying to guess which way to go. 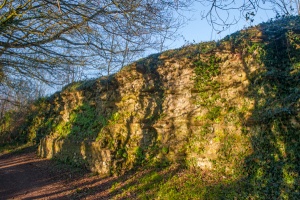 City wall on the west side

Two of the main gate openings are in reasonable condition; on the north gate you can make out where the door hinges were set into the stones.

For much of the way around the perimeter, you can choose to walk at the base of the walls or on top of the wall itself (or at least, on the sloping earthen bank that rises on the inside of the wall). At the northeast corner of the site, the path leaves the wall and joins the main road to Silchester.

This is where the signage is really poor; if you turn left (east) you can follow the road for a hundred yards or so to the remains of the amphitheatre.

This is actually quite an impressive feature; the sheer size of the earthen banks that encircle the floor of the amphitheatre makes you realise just how impressive it would have been with an audience of 7000 or more people crammed onto seating to watch the entertainment.

If you retrace your steps to the east gate and carry on along the road towards Silchester village you come to the attractive 12th-century church of St Mary's, which is built inside the Roman walls (in fact the old Roman wall forms the churchyard boundary on one side. It is well worth stopping for a peep inside the church, which is usually open daylight hours. 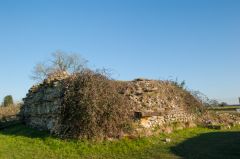 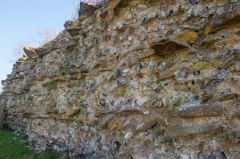 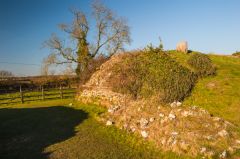 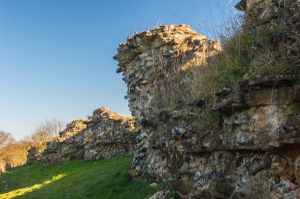 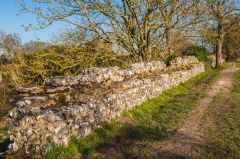 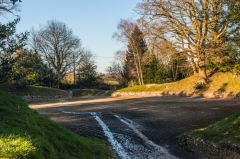