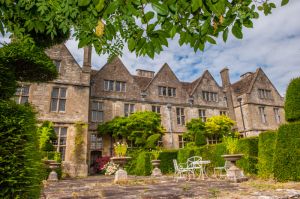 An unusual early 20th-century manor house of Cotswold stone, one of the last traditional country houses in England, Rodmarton Manor was built for Claud and Margaret Biddulph in 1909, by Ernest Barnsley, who created a lovely house in the Arts and Crafts mode.

The manor house was built by local craftsmen using traditional methods and tools and took over 20 years to complete. Most of the furniture in Rodmarton House was specially built for the house.

Rodmarton Manor is composed of coursed and dressed stone, beneath a slate roof punctuated by a seemingly endless series of gables which look out over a large grassed courtyard. The interior features furniture crafted locally by Ernest Gimson, Peter Waals, and the Barnsley brothers.

Outside the house stands one of the best gardens in the Cotswolds, covering eight acres. The garden is laid out as a series of individual garden rooms, each with a distinct and individual character. There is a rockery, alpine area, large kitchen garden, colourful herbaceous borders, and simple white borders. Humorous topiary adds a light note, and there are profuse plantings of roses for summer colour. 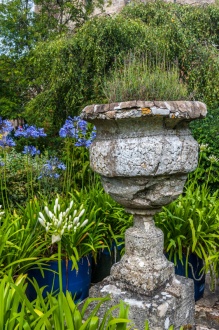 An urn in the
Leisure Garden

A particular feature of Rodmarton gardens are the snowdrops. There are over 150 different varieties of snowdrops on display. They bloom from October through March, with the best displays in January and February. Great care has been taken to make the garden appeal to both birds and butterflies.

We came to Rodmarton Manor on a sunny afternoon in early August. The manor wasn't signposted from nearby roads; but our satnav directed us to the front gates, where a parking area was set up in a field beside the drive leading to the entrance. We parked in the field and then walked down the long, straight drive, along a beautiful holly avenue.

Our first view of the house was a jaw-dropping experience. It simply seems to go on forever, in a series of wings set at slight angles to each other to form a long, low semi-circle. The layout is unlike any other historic house I've ever seen.

After showing our Historic Houses Association membership cards at the house entrance we were free to wander through two floors of room open to visitors. The entrance hallway had what I consider the most attractive pieces of furniture in the whole house; a pair of huge travel chests in Oriental style, painted in vivid red. The ground floor rooms were amazingly light and spacious, with a quite remarkable collection of wooden furniture by local craftsmen.

My son later remarked that the entire house is made of walnut wood. While that's certainly an exaggeration, it does seem that most of the furniture is made of walnut, oak, or fruit tree wood of some description. Room after room displays an exceptional array of finely crafted Arts and Crafts style furniture, from beds to bureaus, chairs to dressers; even the doors are made of polished fruit or nut wood. 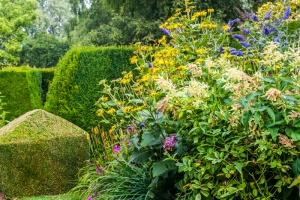 Summer colour in the garden

It is this uniformity of furnishing that gives Rodmarton its own unique style, unlike any other stately home. If you enjoy Arts and Crafts, this is heaven. Even if you don't, its an eye-opener; a glimpse into early 20th-century life.

One feature I really enjoyed is that there are two sets of laminated placards in each room; one gives a detailed explanation of the room and its furnishings, the other gives a quick overview of all the major pieces of furniture, who made them, and how or when they were made.

Behind and to one side of the manor house itself are the gardens, which can be accessed by separate admission if you don't want to see the house. The gardens really do deserve their reputation as one of the finest in the Cotswolds. Each garden area is unique and offers a different ambience.

One feature I've never seen at another garden is a 'Troughery'; a small garden using stone troughs and staddle stones as garden features. The troughs are laid out around clipped topiary to create a wonderful contrast of texture and colour.

The garden 'rooms' are simply stunning; some are formal, like the Winter Garden, some are lushly planted, like the Leisure Garden, and some are sparse and open, like the Terrace. Many of the garden spaces give glimpses of the manor house, little vignettes, half-hidden by foliage.

We absolutely adored Rodmarton. The house is a superb example of a country house, built at a time when the country house itself was about to pass into decline. From that perspective, it is a place of nostalgia, or wistfulness, but the wonderful Arts and Crafts furnishings make it instead a celebration of early 20th-century design and craftsmanship. The gardens perfectly complement the house, and are easily one of the most appealing gardens in the Cotswolds, if not all of England. 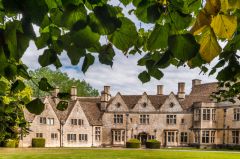 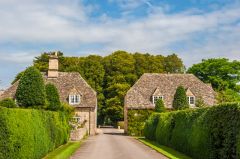 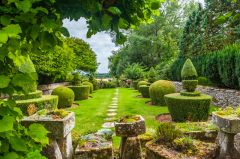 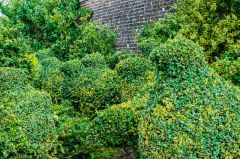 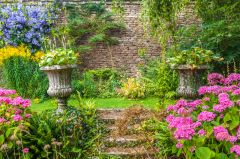 More self catering near Rodmarton Manor >>

This terraced house is based in Cirencester, Gloucestershire and can sleep six people in three bedrooms.
Sleeps 6

This detached, lakeside holiday home is situated in Lower Mill Estate and can sleep six people in three bedrooms.
Sleeps 6