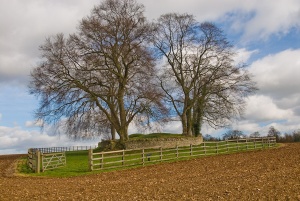 Windmill Tump is a large Neolithic long barrow near Rodmarton, Gloucestershire. The barrow was excavated in the Victorian period and artefacts removed before it was filled in again. There are at least three side chambers, though these have now collapsed. A retaining wall has been built around the barrow to prevent erosion.

When Victorian archaeologists EM Clifford and S Lysons investigated in 1863 they found 13 Neolithic skeletons and two arrowheads in the north chamber, plus scattered remains of further skeletons in the south chamber. In addition, they unearthed Roman pottery and coins from the reign of Claudius Gothicus (AD 268-270). These finds are now in the British Museum in London. The style of arrowheads suggests a construction date of around 3000 BC - 2500 BC.

In 1987 a storm caused two trees on the mound to fall and revealed a previously unknown chamber along the north eastern edge of the mound. Within the chamber were the skeletal remains of several youths or children. 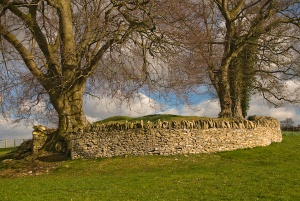 The west end of the barrow.

The site is not located on top of the hill, but rather on the western slope. It is built with a forecourt at the east, marked by two smallish upright stones either side of the collapsed entrance. Remains of animal bones and burning have been found in the forecourt area, suggesting some type of ritual observance took place there.

Think of the forecourt as not too dissimilar in function to a parish church, where some form of ritual ceremony might have taken place associated with concepts of death and/or rebirth.

As is typical, the barrow tapers slightly towards the western end. It is roughly 200 feet long and nearly 9 feet high, and 22 metres (68 feet) at the widest point.

The name of the site comes from the tradition that a windmill once stood on top of the mound, but there is no archaeological evidence to support this, nor any written records.

Access is by way of the A433. Turn off at Trull House Gardens (from the south) or onto Oathill Lane from the north. The barrow is located in a farmer's field several hundred yards from the lane. There is a wide verge with parking for several cars and a signposted path up the hill to the barrow. The going is very easy, though the path is basically non-existent. Rubber boots would be a good idea, as the path eventually veers to cross the field to reach the barrow enclosure. 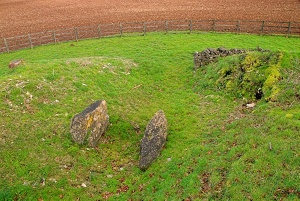 Looking from the forecourt
area into the barrow entrance 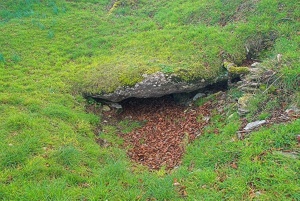 A collapsed side chamber.
There are at least three such
chambers 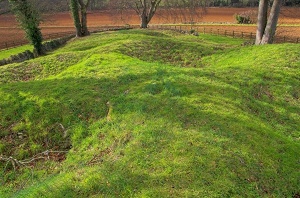 The barrow tapers from east to
west. 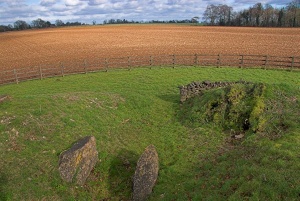 Looking down at the barrow
entrance. Here you can see the
forecourt area 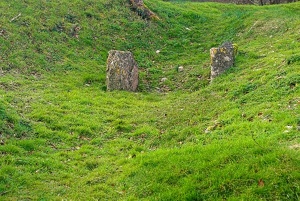 Another view of the east
end of the barrow

More self catering near Windmill Tump