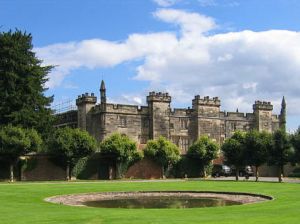 Arbury Hall
A superb Elizabethan mansion set in a lovely 18th-century landscape garden, Arbury has been the home of the Newdigate family for over four centuries. In the late 18th century the Hall was rebuilt by Sir Roger Newdigate in ornate Gothic style.

The Elizabethan house was constructed in 1586 on the site of the 12th-century Augustinian Priory of Arbury. After the Dissolution of the Abbey in 1536, the property was granted to Charles Brandon, Duke of Suffolk. Brandon sold the property on, and it eventually came to Sir Edmund Anderson, who pulled down the monastic buildings and constructed a grand house, incorporating some of the priory stones in the construction.

The house interior is richly furnished, with ornate vaulted ceilings and elegant decoration. Arbury represents one of the first flowerings of the Gothic Revival style that was to become so popular during the 19th century.

The Gardens and parkland at Arbury Hall stretch to over 180 hectares. The park was laid out in the 16th century, and there is a formal garden of about 10 hectares in size, introduced in the late 17th century. To the north-east of the Hall is a formal rose garden, while a walled kitchen garden stands to the north-west.

Much of the current park was designed by Sir Roger Newdigate over the years 1742-1810, with assistance from Sanderson Miller. Here are serpentine lakes and winding paths, and trees carefully planted to provide focal points. The large lake is natural, unlike many 18th-century landscape gardens where lakes had to be man-made at great cost.

Within the Arbury Hall estate are the ruins of Astley Castle, a medieval fortress that was owned by three Queens of England. The castle was used by novelist George Eliot, daughter of an Arbury Hall land agent, as the inspiration for Knebley Abbey in her 'Scenes from a Clerical Life'.

More self catering near Arbury Hall >>