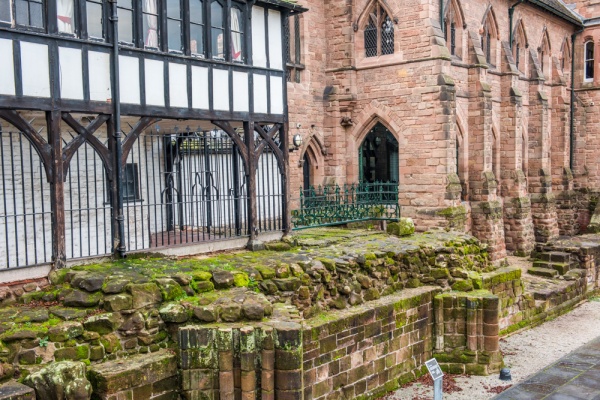 The west wall and foundations of the priory church

Around the year AD 700 St Osberga founded a nunnery by the River Sherbourne, on the edge of the Forest of Arden. A settlement grew up around the nunnery, and this settlement would in time become Coventry.

In 1016 the Danish leader Cnut made a bid for the throne of England. Cnut led his band of warriors deep in the heart of what is now Warwickshire, looting and pillaging. The Danes attacked and destroyed the Saxon nunnery.

After Cnut became king of England one of his acts was to install Leofric as Earl of Mercia. Leofric and his wife Godgifu, known to history as Lady Godiva, re-founded the old nunnery as a monastery of Benedictine monks in 1043. The monastery would evolve to become the Priory and Cathedral of St Mary. 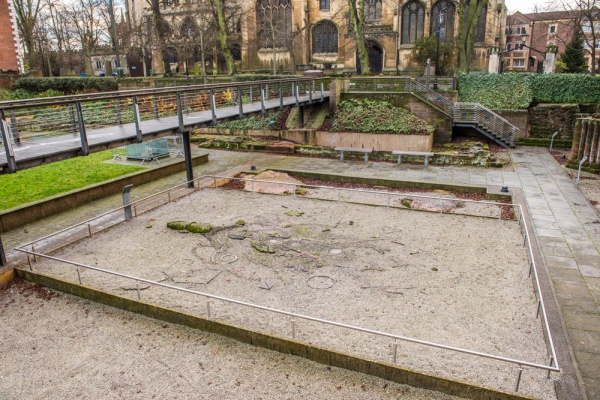 Looking down into the priory church

But did Leofric and Godiva actually found the monastery?

It seems likely that St Mary's was already in existence in AD 1022, which suggests that the noble couple merely endowed the monastery with estates, ensuring its prosperity and importance. According to medieval writer William of Malmesbury, the monastery was so wealthy that its walls were too narrow to contain all the gold and silver. Leofric gave the monks the northern half of his estates in Coventry, which became known as 'the Prior's Half'. The remainder to the south passed in time to the Earls of Chester and became 'The Earl's Half'.

Even allowing for some poetic exaggeration, the monks certainly seem to have done well from their endowment by Leofric and Godiva. Earl Leofric is said to have been buried in the monastery porch when he died in 1057. Some early histories say that Godiva was also buried at the monastery, but it seems much more likely that she was interred at Evesham Abbey.

In 1095 Bishop Robert de Limesey moved his see from Lichfield (with a temporary stopover at Chester) to Coventry. In 1102 the move was authorised by the pope, and the existing priory of St Mary was made both a priory and a cathedral. The existing priory was rebuilt on an opulent scale to reflect its new importance as a cathedral. 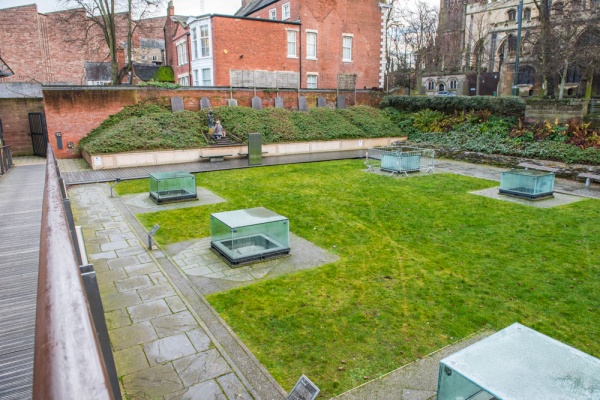 In 1143 Robert Marmion seized the partially built cathedral church and fortified it, as part of his attempt to capture Coventry Castle. He even built a defensive ditch around the cathedral.

In 1250 the prior of St Mary's bought the 'Earl's Half' from Earl Roger de Mold, theoretically uniting all Coventry under the Prior's rule. In practice, however, disputes between the former tenants of the earl and the monastic tenants meant that the Prior never really controlled the entire city. In 1345 the two parts were incorporated by royal charter into what became the city of Coventry, with its council house in St Mary's Guildhall, a few minutes stroll from the Priory.

Cathedral churches were usually spared the effects of Henry VIII's Dissolution of the Monasteries, but because St Mary's position was unique in that it was also a monastic church. The priory was suppressed, and Henry offered the cathedral church to the people of Coventry. The civic administration could not raise the money, so the king ordered the site destroyed. Thus the first Coventry Cathedral was the only English cathedral to be destroyed during the Reformation.

The only major part of the monastic buildings to be spared was the north-west tower, which was used as a dwelling until 1714, then formed part of the Blue Coat School. 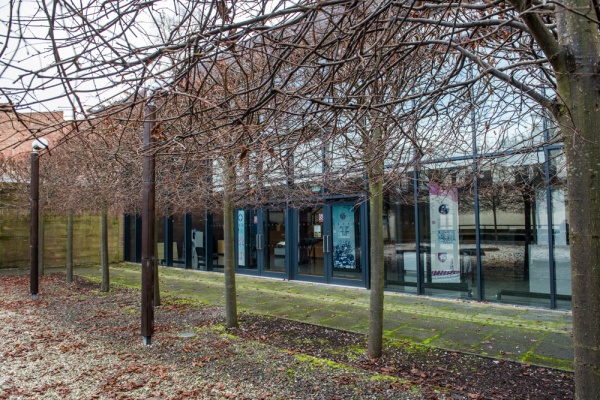 Within the priory cloisters

In 1856 the school was rebuilt, and during construction remains of the original west wall of the medieval cathedral were discovered and the chapter house doorway was unearthed. The City Council decided to develop the priory site as a public park and called in the popular Time Team archaeologists to investigate the site.

Time Team visited the priory site twice, in 1999 and 2001. Their most celebrated discovery was a male skeleton, found just inside the chapter house door. Forensic examination showed that the dead man had been overweight and a diabetic. The conclusion was that he was a prior, one given to living a relatively sedate life with too much good food and drink.

Another find from the site was 'Apocalypse Mural', a 14th-century masonry painted with the likeness of four figures, three of them wearing gilded crowns.

There are two parts to the priory site. A series of pedestrian walkways cross over the priory church, so you can view the site from above and get a good idea of the priory layout. The west wall is exposed, and you can examine the foundation walls. The remains are a bit patchy, but you do get a good sense of the massive scale of the buildings, especially the church, which stretched 425 feet.

The second part of the site is the priory cloisters, which has been transformed into a small park, with seating around a square of trees where the monks once strolled. Beside the cloister park is a modern visitor centre, installed as part of a Millennium project to promote Coventry's history and act as a focal point for encouraging tourism. Volunteers give tours of the ruins as well as the undercroft.