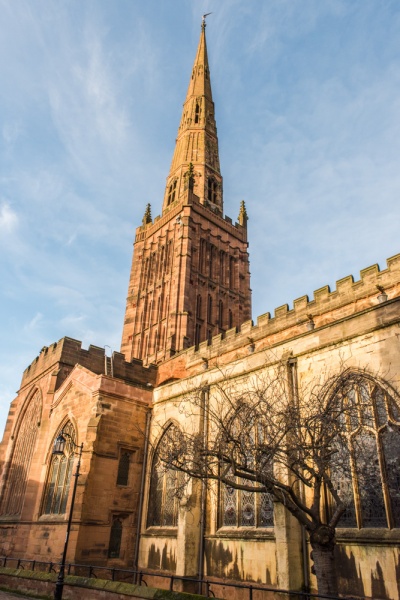 Just a few steps from the ruins of Coventry's medieval cathedral stands the historic church of Holy Trinity. Though the first record of Holy Trinity dates to the early 12th century, the story of the building goes back a century earlier, when Earl Leofric of Mercia and his wife Godiva, founded a Benedictine priory dedicated to St Mary on the site of a Saxon nunnery.

The monks of St Mary administered half of the growing settlement of Coventry and built a side chapel beside the priory to serve as a place of worship for their tenants.

In 1257 that first church burned down, sparing only the north porch. The porch was incorporated into a new 13th-century church.

The renown actress Sarah Siddons was married at Holy Trinity in 1773, and another major figure in the arts, writer Mary Ann Evans (better known by her pen name, George Elliot) was a regular attender. 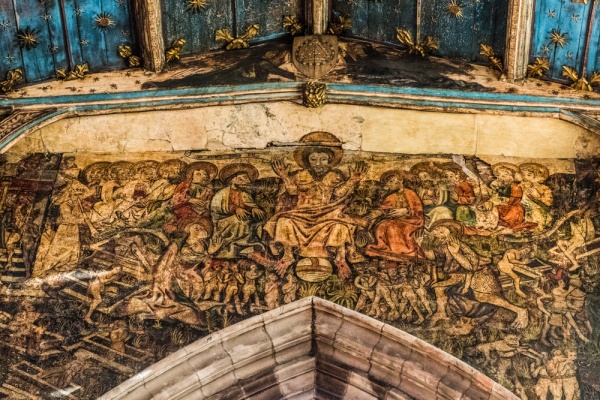 On 14 November 1940, the historic core of Coventry was devastated in a bombing attack that lasted 11 hours and left most of the city destroyed, including the medieval cathedral church of St Michael, just a few steps away from Holy Trinity. Yet Holy Trinity miraculously survived the bombing, due to the heroism of Rev Graham Clitheroe and his curate, who spent the whole night putting out fires and even pushing bombs off the church roof.

The church survived, though the great east and west windows lost most of their historic stained glass. The new east window was paid for by couples who had been married in the church, and was dubbed 'The Bride's Window'. For the next five years, Holy Trinity played host to the cathedral congregation.

Holy Trinity is famous for its beautifully restored 15th-century wall painting of the Biblical Day of Judgement over the chancel arch. The 'Doom' painting depicts a common theme during the medieval period, the End of Days, when the dead rise from their graves and souls are weighed. Those found wanting are led off to Hell, while those found worthy are welcomed into Heaven. 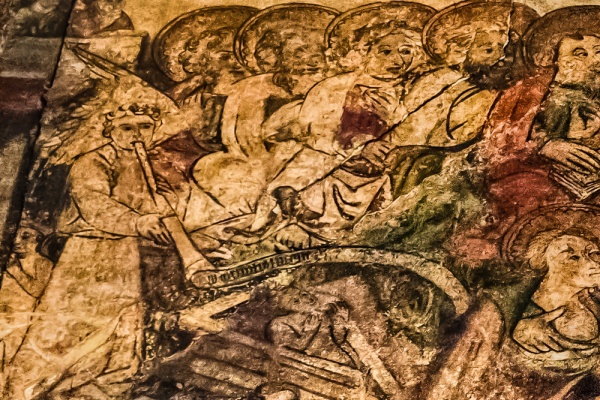 The dead being welcomed to Heaven from the Coventry Doom

The Coventry Doom was painted in the 1430s, possibly in response to an earthquake that may have prompted church leaders to think that the Day of Judgement was at hand. The result is astonishing; a glorious piece of medieval art, full of detail and vibrant colours. At the top of the scene sits Christ, his disciples around him. To his right (the viewer's left) dead rise from their graves and a stair leads up to Heaven.

To the viewer's right St John the Baptist pleads for the souls of the damned. It is fascinating to see that among the damned are church figures including a cardinal and a monk, plus two kings. Even more telling is that several of the damned are ale-wives, generally considered to be corrupt and often accused of watering their ale and over-charging.

Though the Doom painting is stunning, and on its own would make Holy Trinity worth visiting, there is much more of historic interest to see. 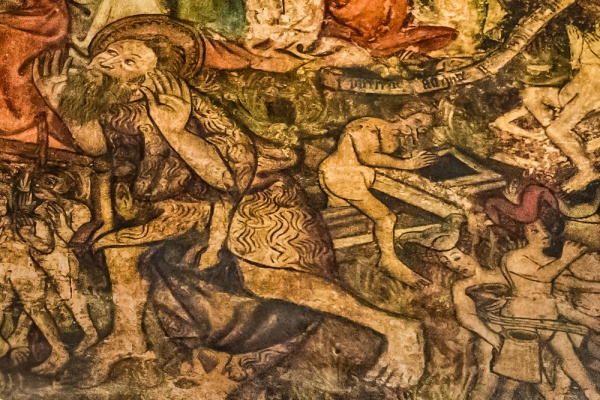 Sinners being led to Hell from the Coventry Doom

The choir stalls boast 20 late 15th-century misericords, or 'mercy seats', made to support clergy who had to stand during long services. Some of the misericord carvings depict heraldic shields, others are carved with foliage. Two misericords show a woodwose, or wild man of the woods, a mythical figure carrying a club and accompanied by a lion. One shows a Green Man, a face with foliage emerging from his mouth, while others show a hunting scene, a griffin, and the mythological creature known as a basilisk.

At the west end of the nave is a 15th-century octagonal font, painted with bright colours, while at the crossing is a marvellous stone pulpit built in 1470. The pulpit is carved with quatrefoil panels and foliage, as well as two damaged figures, thought to represent Henry VI and Queen Margaret, who made Coventry their base during the Wars of the Roses.

Across from the pulpit is a brass eagle lectern thought to date to the Elizabethan period. 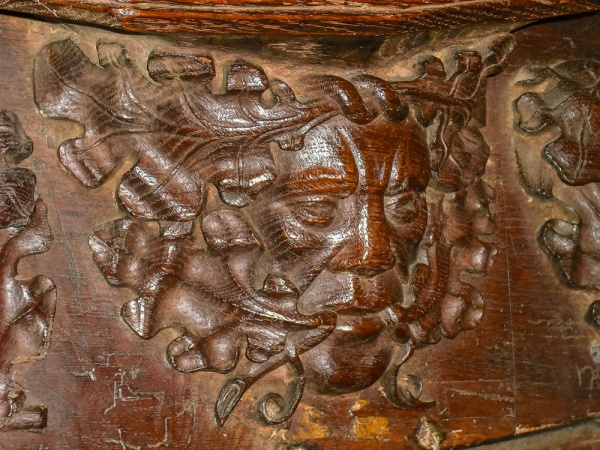 Green Man misericord in the choir

One humorous feature is a tall-backed chair tucked against the north aisle wall. The story of the Tall Chair goes back to 1833, when the vicar of Holy Trinity, Rev Walter Hook, wanted to invite his friend the Bishop of Ross, Moray, and Argyll, to visit.

At that time the Church of England had strict laws that forbade Scottish clergy of any rank from setting foot in their churches. Rev Hook must have been a very clever man, for he had a chair made so the Bishop could be carried into the church, his feet well clear of the floor, so he never actually 'set foot' in the church.

In the north-west corner of the church is the Archdeacon's Court, an area set aside for dispensing ecclesiastical justice. In the Archdeacon's Court are several old memorials, including a medieval memorial to a member of the Morton family. The memorial is decorated with a rebus, or symbolic pun on the name Morton. Beside the Morton memorial is a display case with one of the church's historic treasures, a copy of The Bishop's Bible, printed in 1568. In a window above the Bible display is a stained glass panel with fragments of medieval glass that survived the 1940 bombing. 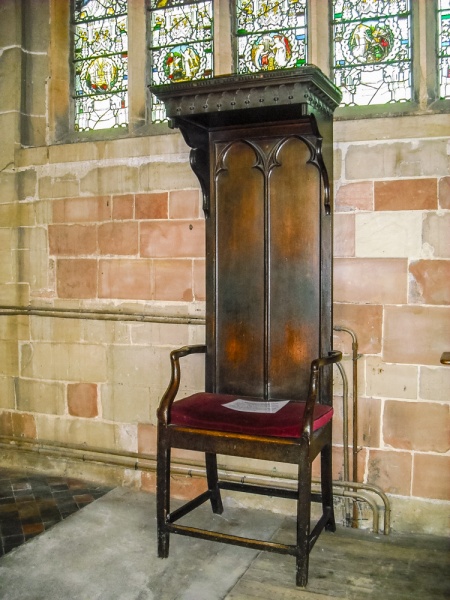 While not as historic as the Bishop's Bible, another feature that will catch your eye is the beautiful stained glass west window. This is known as the Te Deum Window, and shows Christ in Majesty seated on a rainbow, while around him are historical figures of the Christian Church. The window was designed by portrait artist Hugh Easton to replace a Victorian window destroyed by bombs in 1940.

Holy Trinity is open to visitors daily and was open when we visited. 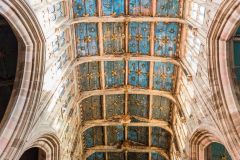 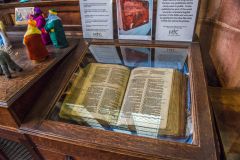