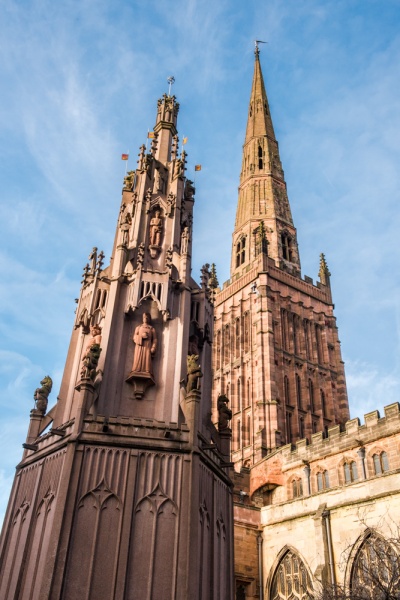 During the medieval period, a market cross stood at the junction of Broadgate and Cross Cheaping, in the heart of Coventry. The very name 'Cross Cheaping' tells its own story; Cheaping comes from the Old English 'ceap', or market, and Cross refers to the market cross. Not only was the market cross a place to conduct business and trade goods, but it was also the site of public executions.

We do not know what that early medieval cross looked like, but it may have been a tall stone shaft, topped with a cross shape, standing on a stepped base.

In 1423 the court-leet, or manorial court, ordered a new cross to be built. The Mayor, Henry Peyto, gave money towards the new cross from his own pocket, and the Leet also gave a sizeable amount. Again we do not know exactly what this 15th-century cross looked like, though the city records say that it stood on 8 pillars. The cross only stood for a century before it was declared unsafe and part of the top section had to be taken down for safety's sake in 1537. 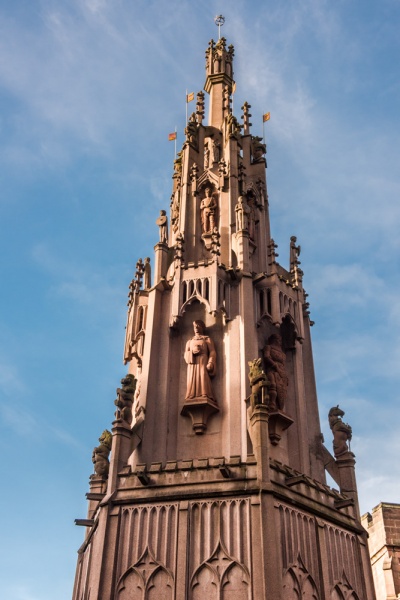 In 1541 Sir William Hollyes, a wealthy mercer and former Lord Mayor of London, bequeathed 200 pounds for a new cross. Though Hollyes rose to prominence in London, he had been born in Stoke, Coventry. The Tudor cross was built on the same site as the previous cross, and was made of stone quarried at Rowington and Attleborough. It was modelled after the market cross in Abingdon-on-Thames, Oxfordshire (then in Berkshire).

Detailed instructions were made for exactly how the cross was to be built. It stood 57 feet high and rose in four diminishing sections. The top three sections were decorated with statues. The bottom of these sections had statues depicting kings; Henry VI, King John, Edward I, Henry II, Richard I and Henry I. Three more kings, Edward III, Henry II, Richard III, stood above, with St George and St Michael. On the top section were figures of St Christopher, St James, St Peter, and two monks.

The very top of the cross had statues symbolic of Justice and Liberty. It is thought that several of these statues were taken from the recently suppressed monastery of Whitefriars. The cross was painted in bright colours and gilded. It must have been quite a sight, and when the cross was being re-gilded several centuries later it was reportedly so bright that when the sun shone people had to avert their eyes. 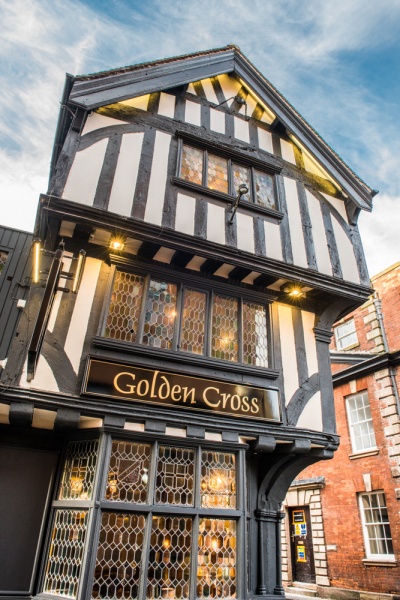 Two local inns are named for the cross; at 29 Cross Cheaping is the 16th-century Coventry Cross pub, while at 8 Hay Lane is the Golden Cross pub.

The cross had to be repaired in 1608. Curiously, a figure of Christ was removed and replaced with a statue of Lady Godiva. In 1650, at the start of Cromwell's Commonwealth, six royal coats of arms were removed from the cross.

Like the 15th century cross, the top sections of the Tudor cross became dangerously unsafe in time and were removed in 1753-1755. The city council decided that the cross was too dangerous to remain, and in 1771 ordered it demolished. Three statues alone have survived; one is preserved in the Herbert Museum and the other two are in St Mary's Guildhall.

But Coventry Cross seems like a concept that will never die. In the 1930s the idea was mooted to erect a new cross based on the absurdly ornate Tudor cross. The old site on Cross Cheaping and Broadgate was considered unsuitable, so the replica was moved to a new site between Holy Trinity Church and Cuckoo Lane, roughly 100 metres from the original location. Work did not begin until the 1960s and the cross was not completed until 1976.

Like the Tudor cross, the new Coventry Cross rises in four sections from a stepped base. The lower section is decorated with blind arcading, while the middle two sections have red sandstone statues set in canopied niches. Unlike the Tudor cross, the modern cross has not been painted or gilded, so even on a sunny day you can look directly at it! It is fascinating to see the Cross against the background of Holy Trinity's spire high above.

It is very easy to find Coventry Cross. It stands almost directly between the cathedral ruins and Holy Trinity. 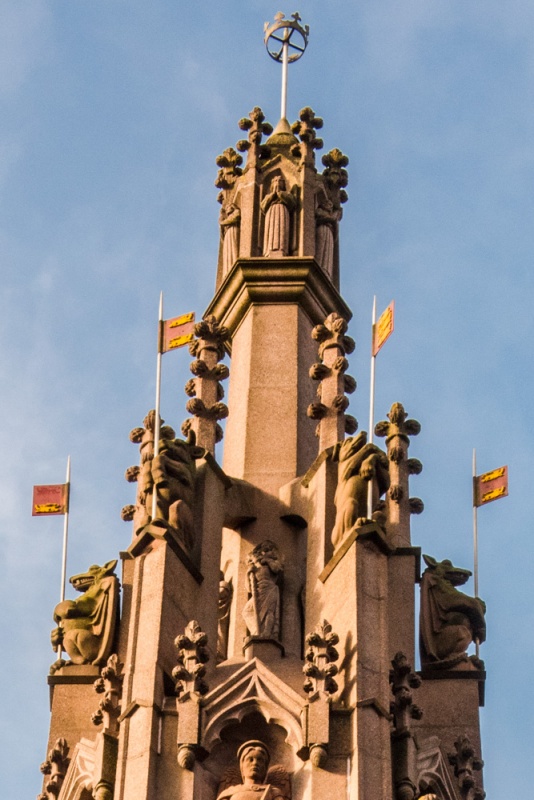 The top of the Cross

More self catering near Coventry Cross