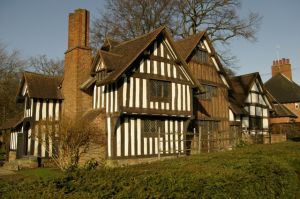 Selly Manor
A 14th-century manor house that may well be the oldest surviving building in Birmingham. Selly Manor was rescued from demolition in 1907 by chocolate magnate George Cadbury. In 1917 the building was carefully dismantled piece by piece and reassembled at its current site in Bournville for use as a museum.

The manor house dates to at least 1327, and it contains a fine collection of Tudor and Stuart furniture and household objects collected by Laurence Cadbury, son of George. It was the home of the Jouette family, the local lords of the tithing, a sort of early tax collector.

Selly Manor stands three storeys high. The oldest section is built with timber framing, and walled with wattle and daub. The building was extended during the reign of Henry VIII with brick used to fill in between oak timbers. A smaller Elizabethan section is the 'newest' section of the house.

The interior has four main rooms on view, including the Parlour, Hall, Kitchen, and Solar Bedchamber. Minworth Greaves is a much simpler building, consisting of a single main chamber.

The village of Bournville was built by George Cadbury beside his chocolate factory and is only a short distance from Cadbury Chocolate World.

More self catering near Selly Manor >>