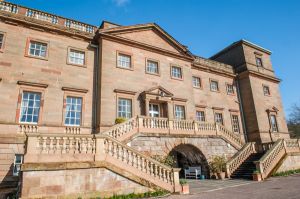 The family home of the Viscounts Cobham for over 250 years, Hagley Hall is a Palladian mansion built by gentleman architect Sanderson Miller for the 1st Lord Lyttelton from 1754-1760. It is built of pink sandstone, to a rectangular plan with four corner towers, and the house is set on a low rise, giving broad views over rolling countryside.

Hagley has been called the 'last of the great Palladian houses'. Its design was influenced by that of Houghton Hall in Norfolk. Though the original estimate for construction was £12,000, the actual building cost a staggering £25,823 plus a further £8,000 for interior decoration.

The interior boasts lovely rococo plasterwork decoration by Francesco Vassali, plus paintings by artists such as Joshua Reynolds and Van Dyck. There is ornate furniture by Robert Adam and Thomas Chippendale, and a succession of attractive staterooms.

One of the most interesting rooms on view is the drawing room, which is almost completely unaltered from its 18th-century inception and boasts colourful tapestry wall hangings. Another intriguing chamber is the Long Gallery. This was originally meant as a place to display family sculpture and artwork, but in the 19th century it was frequently used for family cricket practice, with the outcome that much modern restoration was necessary to repair the 'sporting' damage.

Behind the house is the parish church, also rebuilt by Sanderson Miller at the same time as the house. Beyond, the grounds stretch away to 350 acres of landscaped garden and parkland, dotted with classical temples and other such follies, some by Sanderson Miller again, and others designed by James 'Athenian' Stuart, Lord Camelford, Thomas Pitt, and Henry Keene.

Hagley Hall is only open for a short period each year, usually in early Spring. We were fortunate enough to visit on a lovely sunny day in March, when the sunlight seemed to make the reddish sandstone glow. We parked in front of the house, right beside the sweeping curve of the entrance staircase. I could imagine carriages of elegant visitors stopping in just the same spot hundreds of years ago.

We were admitted into the cool, luxuriously panelled interior by a dapper man whose elegant attire instantly made me wish I'd dressed up for the occasion. But no one could have been friendlier. We had just missed the start of a guided tour, but he took us up to join the guide and told us we could go around again on the next tour to make up for any rooms we'd missed.

The tour guide was excellent, mixing history with tales of the generations of Lytteltons and their foibles. And what a cast of characters they were, from Gunpowder Plotters to confidantes of royalty, the Lytteltons moved at the very highest levels of society for centuries.

The interiors of the Hall were stunning, from the richly panelled library with family portraits and a set of works given by Rudyard Kipling, to the family dining room, a pleasantly relaxed space warmed by the afternoon sun.

There was nothing relaxed about the Tapestry Drawing Room, however; the walls were lined with a superb set of tapestry panels specially made for the space, with the furniture covered in the same patterns.

The guide told us a curious thing about this Tapestry Room; it is not actually owned by the Lyttelton family. It seems that the government accepted the room and its contents in lieu of death duties, so technically that one room in the grand private house belongs to the British taxpayer and anyone could - in theory - arrange to see it at any time.

The highlight for me was the Long Gallery, decorated in superb Palladian style with neoclassical plasterwork and panelling. In one corner of the gallery the Coronation Robes worn by the Lytteltons to Elizabeth II's coronation are on display. The walls of this chamber are lined with an excellent collection of art, dating to at least the 17th century. By a curious twist of fate a portrait of Oliver Cromwell stares across the hall at his old foe, Charles I.

The house tour took about one hour, and was an absolute delight. I was incredibly impressed with how well the house had been restored considering there had been a very bad fire in 1925 and extensive water damage from a recent leaking roof. The interiors are a marvellous example of Palladian style and deserve mention with the very best 18th-century houses in England.

After we finished touring the house we strolled over to St John's church, behind the Hall. Though from a distance it looks very much a Victorian estate church, once you enter the interior you soon realise that the 19th-century exterior hides a medieval origin.

There is a fascinating medieval tomb niche against the north wall, but the really outstanding features are memorials to generations of the Lyttelton family, and a superb set of 19th century stained glass, much of it by CE Kempe (look for his trademark wheatsheaf symbol).

mage of the Temple of Theseus is (c) Paul Brooker, republished with gratitude under a Creative Commons license 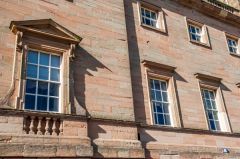 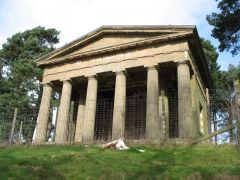 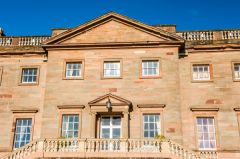 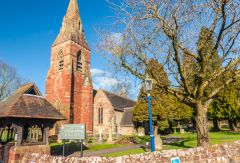 More self catering near Hagley Hall >>