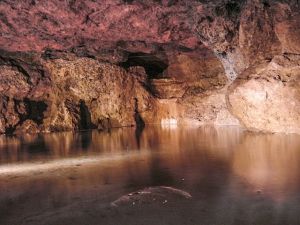 Clearwell Caves subterranean lake
A fascinating natural wonder located in the heart of the Royal Forest of Dean, Clearwell Caves is a series of underground caverns formed partly by ironworking activity over the course of centuries.

There are nine caverns on view. In addition to the underground caves, there is a working blacksmith shop, ochre workshop, and exhibits of local geology. All visits to the caves are by guided tour.

Iron Ore has been prised from the caverns at Clearwell for centuries. Some of the miners were called Free Miners, men who had the legal birthright to explore for mineral wealth in St Briavels Hundred and the Royal Forest of Dean. The current owner of Clearwell Caves is the last Free Miner in the region still actively working.

Iron ore in the form of ochre has been mined at Clearwell since the Middle Stone Age (about 5000 BCE). Ochre coloured brown, red, purple, and yellow is still mined at Clearwell today, mostly using hand tools similar to those used by ancient miners long ago. Much of the ochre is used to produce natural paints that are highly prized by artists.

Our family took one of the guided tours of Clearwell Caves and really enjoyed ourselves. The tour guide was knowledgeable and entertaining, and we had a great time. Do yourself a favour and wear good, waterproof footwear!

More self catering near Clearwell Caves and Ancient Iron Mines >> 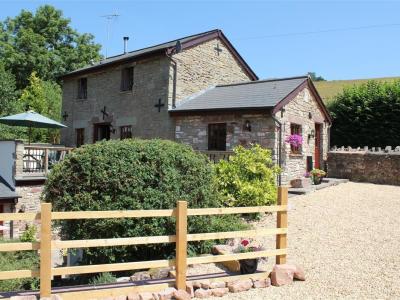 This three bedroom cottage can sleep six people on the fringes of The Forest of Dean.
Sleeps 5 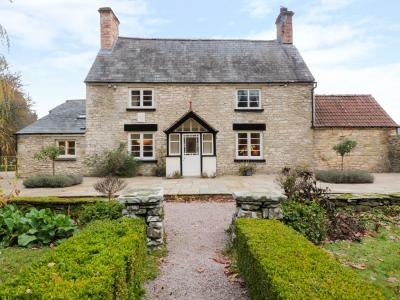 A detached cottage situated near the village of Broadwell. It houses five bedrooms and can sleep up to 12 people.
Sleeps 12