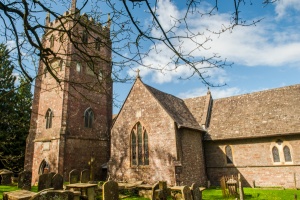 The medieval church of St Mary stands immediately opposite the imposing twin-towered gatehouse of St Briavels Castle. There was a place of worship here, on a wooded hillside overlooking the River Wye, long before the Normans built their castle here, but the first stone church was erected around the year 1086.

The first church was a very simple rectangular building, made of local Forest stone, but in the 12th century it was enlarged to create a cruciform building with north and south transepts, a chancel, and a tower rising over a central crossing.

The 12th-century tower became unsafe over the centuries, and in the Victorian period it was taken down, and a new tower built in the south-west corner of the church. You can still see the old central stair to the now-vanished tower.

The north nave arches and columns were rebuilt in Early English style in 1274 and make a lovely contrast to the older Norman arches on the south side of the nave.

In the south transept, now the Lady Chapel, is an altar brought from the medieval chapel of St Briavels Castle, across the road. Beside the altar is a tomb recess built into the south wall. The church guidebook calls it an Easter Tomb. It's a curious piece of sculpture, with a grave slab of Forest stone lying within a canopied niche.

The slab is decorated with a cross and floral patterns, and was carved for Robert, Abbot of Lire, in France, who died here in 1272, but the head of a woman has been added to the top of the slab. No one knows who the woman was or why the effigy head came to be added to the 13th century grave of an abbot! On a nearby arch leading to the south aisle is a carved head that appears to be half dragon, half serpent. 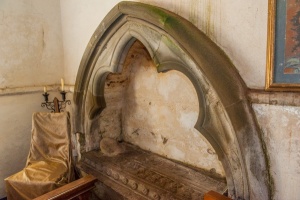 The Abbot of Lire's tomb niche 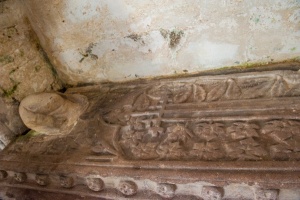 The grave slab and woman's head

At the west end of the south aisle (to your left as you enter the church), is a large table tomb to William Warren (d. 1573) and his wife Mariana. The couple is shown recumbent, propped on one elbow - a very uncomfortable position! Around the base of the tomb are small figures of the couples' four children. 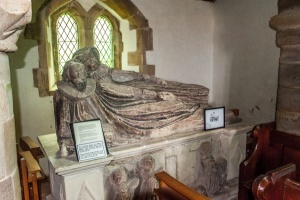 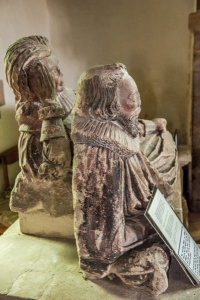 Near the Warren tomb is the striking Norman font. The bowl is very simple, but around the bowl base is a very odd 'skirt', scalloped so that it looks like a child's drawing of a daisy. This stone frill is thought to be unique in Britain. Certainly, I've never seen anything similar, and its purpose is unknown. 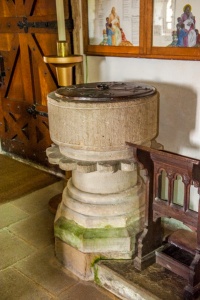 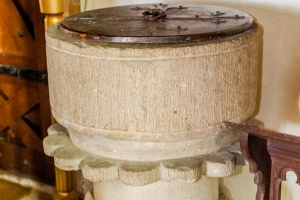 A closer look at the odd frill on the font

One last note; outside in the churchyard, filled with daffodils when we visited on a sunny Spring day, is a memorial to a mariner named Joseph Williams, who died in 1774.

The location of St Mary's is simply wonderful, high on a steep hillside over the Wye valley, with Edward I's sturdy gatehouse directly across the road. The church and castle make an odd pair, perhaps, but they make a very pretty picture when the sun is shining and the birds are singing. 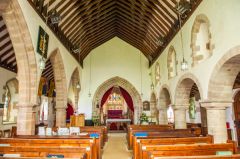 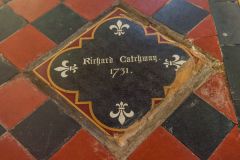 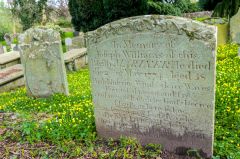 More self catering near St Briavels

Self Catering near St Briavels