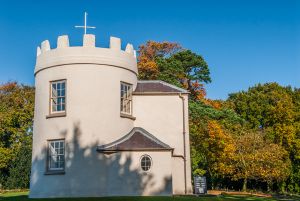 Two Georgian buildings sit on top of a hill east of Monmouth, an 18th c round House, and an 1800 Naval Temple commemorating the Battle of the Nile.
The name 'Kymin' is applied almost arbitrarily to the hill, to the estate, and to the unusual and eye-catching banqueting house, sometimes known as The Roundhouse.

The Roundhouse
The banqueting house was erected in 1794 on a prominent viewpoint atop Kymin Hill, offering wonderful views over the Wye valley and extending to 9 counties on a clear day. It is composed of a round, two-storey tower with a crenellated roof, with two small additions to the rear. The Roundhouse was built by the Monmouth Picnic Club, or 'Kymin Club' as it became known, prompted by Philip Meakins Hardwick. Among the prominent list of subscribers were the Duke of Bedford and no less than 8 Members of Parliament.

The avowed aim of the Club was to meet each week to dine and spend the day 'in a social and friendly manner'. To further that end they needed a venue, especially one that was suitable for the summer months. The Roundhouse was built with kitchens at ground level and the banqueting room above. To take full advantage of the wonderful views several telescopes were mounted on the roof. The Roundhouse was also rented out to other parties. 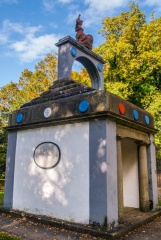 The Naval Temple
The Club did not confine itself to dining and drinking; they laid out a bowling green near the Roundhouse, and stables for horses. They created woodland walking trails with carefully arranged seats to take advantage of good viewpoints. The bowling was often used for special events, perhaps the most memorable being the centenary celebration of the Battle of Trafalgar in 1905.

The Naval Temple
In 1800 the Kymin Club built the Naval Temple, a short stroll from the Roundhouse. The Temple had a dual purpose; to commemorate the 2nd anniversary of English victory at the Battle of the Nile in 1798, and to serve as a memorial to 16 Admirals of the Royal Navy who led the Navy to significant naval victories around the world.

The neo-classical Temple is topped by a bronze figure of Britannia. It was dedicated by the Duchess of Beaufort, daughter of Admiral Boscawen, one of the Admirals mentioned on the memorial. There are four oval plaques on each side of the memorial base, each commemorating a specific Admiral and the battle for which he is chiefly remembered. The Admirals named on the plaques are:


It is intriguing that Admiral Nelson is one of those named, for he was still 5 years away from his most significant victory at sea; the Battle of Trafalgar in 1805. Nelson visited the Temple in 1802, accompanied by Sir William Hamilton and Lady Emma Hamilton, Nelson's lover. The party visited the Temple and had breakfast in the Roundhouse, where he is said to have admired the view.

Visiting
The Kymin is signposted off the A4136 1 miles east of Monmouth. A winding road climbs to a National Trust car park near the summit of the hill. There is easy access to the Naval Temple, and the exterior of the Roiundhouse, but the interior can only be viewed at specified opening times. There are excellent walking trails through the area, and wonderful views on a clear day. 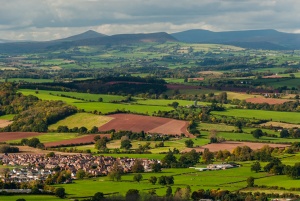 The view from the Roundhouse 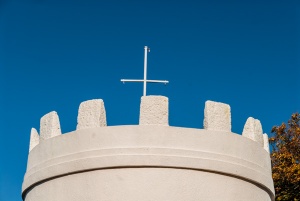 The castellated roof of the Roundhouse 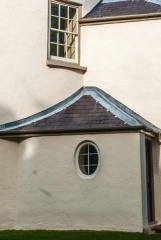 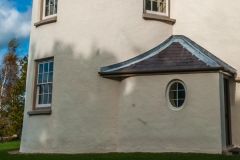 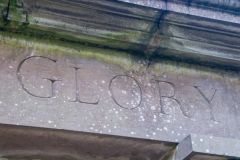 Nearest Accommodation to The Kymin:

More self catering near The Kymin >>

More Hotels near The Kymin >>

More bed and breakfasts near The Kymin >>