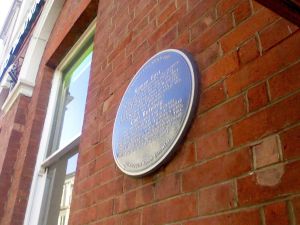 Blue plaque commemorating Monmouth Roman Fort
A Roman fort called Blestium was established at what is now Monmouth at the very outset of the Roman advance into Wales, around AD 55.
History
Some time prior to 55 AD the invading Roman army established a fort at a place they called Blestium. If the date is correct that makes Monmouth the site of the first Roman fort in Wales.

The fort was situated on the major road between Silchester and Caerleon. The fort may have been established by Publius Ostorius Scapula, who headed the first Roman attack against the powerful Silures tribe in south east Wales. The fort probably housed about 2000 soldiers during the campaign, and was retained as a minor fort after the first military campaign ended.

The Romans built a number of similar forts along the Monnow valley. They need to, for the Silures did not capitulate easily and carried on a guerrilla campaign for 3 decades before finally giving way to the might of Rome. The site lay on the boundary of tribal territories controlled by the Dobunni and Silures. The fact that no stone foundations have been found suggests that dwellings were made of timber, and probably very rudimentary.

The Antonine Itinerary
The only written record of the fort comes from the Antonine Itinerary, a 2nd century document outline major trade routes in the Roman Empire. One section of the Itinerary details British routes, one of which goes through Monmouth. According to the Itinerary, the fort of Blestium lay exactly 11 miles from Usk and 11 miles from Weston under Penyard. That would place it precisely in the centre of modern Monmouth.

Excavations revealed the outer ditch of the fort just off Monnow Street in the town centre. Bones and pottery were found in Agincourt Square, in the town centre. Cross the river in Overmonnow there is evidence of iron working, including charcoal smelting. Near the river crossing there are remains of stone buildings from the 2nd-3rd centuries, linked to iron working activities. A number of 3rd-4th century coins have been unearthed around Monmouth, suggesting that a civilian settlement grew up here after the fort fell out of use.

Archaeological Finds
In 2010 workers digging for a new gas main uncovered evidence of the Roman fort. The fort seems to have covered most of the current town centre, and definitely existed at least as early as 55 AD. Archaeologists recovered hundreds of pieces of pottery and bones before the construct work continued. The dig also uncovered the route of a Roman road following the line of St John's Street.

Trivia
A blue plaque commemorating the Blestium fort is set on the wall of an 18th century town house on Monnow Street. The house itself has nothing to do with the fort. It was built by Philip Hardwick, who helped build the Kymin banqueting house in 1800. Admiral Horatio Nelson visited the house in 1802, when Monmouth's town clerk was in residence.

There is nothing to see of the Roman fort, as remains had to be covered up after excavation work was complete. Really the only thing to see is the simple blue plaque mentioned above. It is interesting to speculate what the fort might have looked like in AD 55, however, and what life was like for the soldiers stationed here, at the very edge of the Roman Empire.