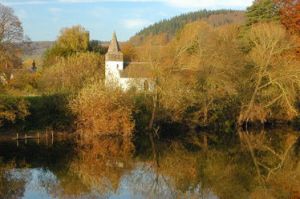 Dixton, St Peter's Church
Although part of the Herefordshire diocese, Dixton is actually across the border in Wales. This pretty rural church stands on the banks of the River Wye just north of Monmouth. The church was officially transferred to the Diocese of Llandaff in 1844, but in 1920 the parishioners voted to rejoin the Church of England.

There was probably a church here well before the Norman Conquest, but the current church dates to the 12th century, though it appears to incorporate stonework from an earlier, Saxon building. St Peter's is a pretty, whitewashed church, but its precarious position beside Wye has led to frequent floods.

A series of brass plaques beside the chancel arch mark the high-water points of previous floods.

Just how old is Dixton church? The Book of Llandaff mentions a church on this site as early as AD 735 and calls it an 'old church', suggesting it had a very early foundation. That first church was dedicated to the Welsh saint Tydwig. The dedication gradually evolved into 'Dixton', the name of the village itself.

The oldest part of the present whitewashed church dates to the late Saxon or early Norman period. You can see evidence of Saxon-style herringbone stonework in the north nave wall. The chancel and tower date to the 13th century, when the nave was extended.

The chancel wall is made of red sandstone, pierced by a pair of sanctuary windows. There is a priest's door in the south chancel wall, with an ancient stone bench outside the door.

A specially built balcony at the west end of the church has been created for safe storage of precious items out of the reach of rising water. One interior feature is a royal coat of arms to Queen Anne, dated 1711.

The church has very good Victorian glass, including one by architect JP Seddon, who restored the church in 1862.

In addition, the oak balcony screen has been highly decorated with very fine carvings.

In the churchyard is a medieval stone cross.