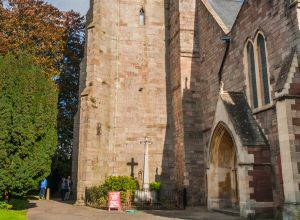 Monmouth, St Mary's Church
St Mary's Church in Monmouth has been a religious site since 1101 when the church was part of a Benedictine priory. St Mary's was restored in 1773 and then remodelled in the 19th century. Norman and 14th century parts survive along with some medieval tiles.

A priory was established here in 1075 by Gwethenoc, lord of Monmouth, possibly on the site of an 8th century Celtic church. The priory was a daughter house of the Abbey at Saumur. The priory church began to serve as the parish church as early as the 12th century, though the priory itself was not dissolved until 1536.

The church contains stained glass by the Victorian artist, CE Kempe. The best of Kempe's work is the west tower window, depicting the theme of baptism. The window tracery is original 14th century work, while the glass dates to 1883. Look for Kempe's trademark wheatsheaf symbol.

Very little of the medieval priory church remains intact, but some medieval tiles are displayed in frames on the wall at the west end of the church. Most date to the 15th century though a few are from the previous century. The tiles were made at a kiln in nearby Monk Street.

Across the green from the church are all that remains of the original medieval priory buildings including a large 15th century oriel window known as Geoffrey's Window, after a fanciful connection with the historian Geoffrey of Monmouth. Look for the carvings of a knight, an angel, and a miller.