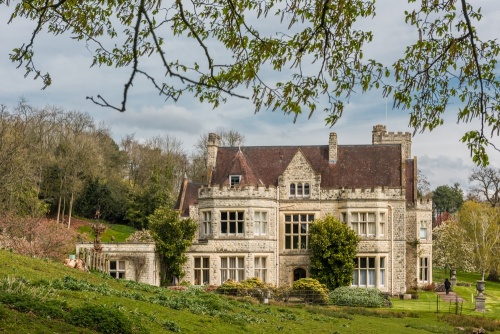 An Arts and Crafts style garden surrounds the stately home of Lydney Park, the home of Viscount Bledisloe. In the grounds is a large deer park with a resident herd of deer, the remains of a Roman encampment with a temple and bathhouse, and a Norman castle motte, while inside the house is a fascinating museum.

The history of the Lydney Park estate goes back to the 17th-century when it was owned by the Wintour family. It was they who enclosed a large area of the estate as a deer park and established the herds of deer that still roam the grounds today. 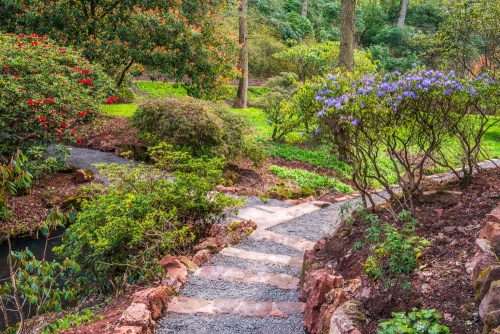 Paths wind through the woodland gardens

The original mansion house at Lydney Park was close to the main road (now the A48). It had a walled garden and a pleasure ground, while the fields behind the house were set aside for the deer park.

All that changed in 1875 when Rev William Bathurst built a new house in an elevated position in the deer park, with wonderful views over the River Severn below. All that remains of the old house today are the former stables and laundry, now used as a craft centre and a nursery school respectively. The beautiful 1875 house was set in formal terraced gardens.

During WWII the Bathurst family hosted the Dutch royal family at Lydney after they had been exiled from their home country. The house later served as a school for girls.

Wartime changes swept away many of the Victorian formal gardens near the house so much of what you see today is a result of changes made in the 1950s when hedges were planted on the wide lawns and magnolias and Japanese cherries planted to create a wonderful mass of spring colour on the approach to the house. 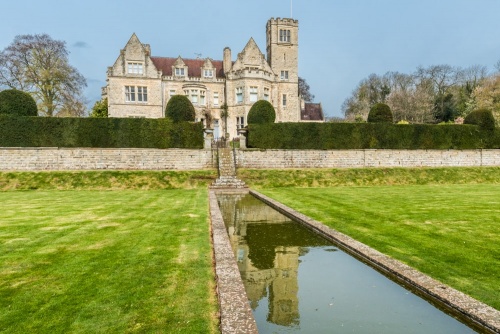 Formal gardens below the house

Though the formal gardens are attractive, what really makes a visit to Lydney Park so enjoyable is the chance to explore the eight acres of woodland garden created by the 2nd Lord Bledisloe in a sheltered valley some distance from the house. This woodland area is planted with azaleas, magnolias, flowering shrubs, and rhododendrons.

Azaleas and rhododendrons are the stat species, with lumps of other acid-loving plants designed to provide bold splashes of lush colour from March through June.

Near the garden entrance is a small pond crossed by stepping stones and surrounded by Japanese maples to create a very Oriental layout. Scattered throughout this low-lying area are clumps of colourful - and pungent - American Skunk Cabbages.

The lower part of the garden is laid out around three lovely ponds, linked by a slow-moving stream and picturesque cascades. Looking down on the ponds is the Italian Folly, a delightfully delicate Venetian gazebo brought from Venice by Lord Bledisloe. The Folly looks for all the world like a neo-classical temple and stands beneath an imposing Scots Pine. 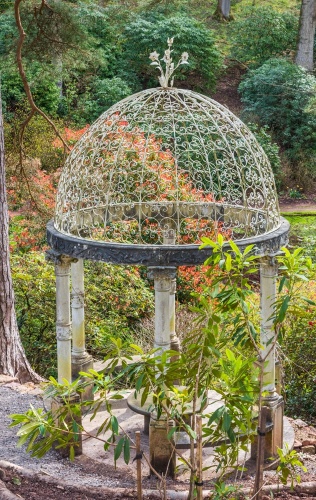 Within the Folly is a stone table erected by Lady Bledisloe in memory of her husband. The table is inscribed with the words 'To the memory of Benjamin Ludlow Bathurst who made and loved this garden'.

There is also an arboretum of rare trees located on the route out of the grounds. The arboretum is only open on certain days throughout the spring and summer. 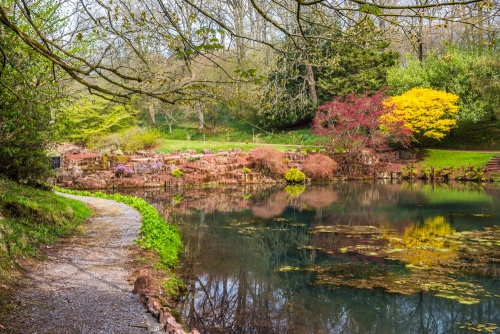 A quiet pond in the lower woodland garden

Lydney Park Temple comprises a Roman temple and villa complex built upon an earlier Iron Age hill fort. The hill fort is quite extensive, covering some 4.5 acres across the tip of a promontory, and offers excellent views across the Severn valley. The fort was occupied as early as the 1st century and remained in occupation during the Roman period, when iron ore was mined at the site.

One 50 ft long shaft of the iron mines can be seen today, running under the fort. In the 4th century a temple complex was added to the southern half of the fort site. The temple appears to have been dedicated to Nodens Mars, the Romano-Celtic god of hunting and healing. The site was excavated in the 1920s and yielded over 8,000 coins, carved statues, mosaics, and bronze reliefs. Many of these artefacts can be seen in the small museum inside Lydney Park house.

JRR Tolkien, author of the Lord of the Rings trilogy, worked on the excavations of the camp, and as an expert in Celtic culture was asked by Lord Bledisloe to investigate the origins of the Nodens connection. Tolkien is said to have been heavily influenced by folk tales surrounding the area in developing the mythology of his stories of Middle Earth. 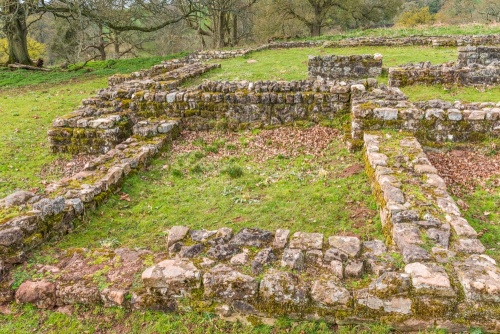 Many of the finds discovered during excavations of the Roman site are on display in the museum, housed in a wing of the mansion house. Among these finds is The Lydney Dog, a stunning depiction of a wolfhound made from cast bronze.

The Lydney Dog is one of the finest pieces of Romano-British sculpture in existence. It is just one of many depictions of dogs found on the temple site; dogs were often used by healing shrines to lick a visitor's sores as part of a healing cure and were often linked in mythology to healing and to the god Nodens.

The Dog was adopted by the Lydney Park Estate as its symbol. The museum also has a large number of objects connected to Lord Bledisloe in his role as Governor-General of New Zealand as well as a display relating to the Dutch royal family and their time in refuge at Lydney Park during WWII.

On Little Camp Hill, immediately south of the mansion and overlooking the deer park, are the remains of an earthwork enclosure and stone fortification that may be a previously unknown Norman motte and bailey castle. It seems likely that the site was first used when the Roman camp was built on Camp Hill itself. Indeed, Ordnance Survey maps have marked the location as 'Outpost', meaning it was linked to the camp and temple complex.

The castle site was partially excavated in 1929 to reveal a stone keep within an inner bailey on the summit of the hill, with a larger outer bailey protected by earthworks. The north, south and west sides rely on the natural steep slope for defence while the earthworks are more pronounced on the gently-sloping east side. The inner bailey is roughly 30m square with 2m high banks. The outer bailey is triangular and encloses an area 30m x 40m. 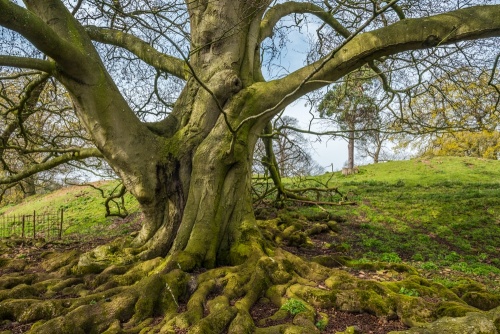 A tree grows on the Norman castle earthworks

Within the inner bailey are the remains of a rectangular stone keep roughly 9.2m x 7.2m internally. The keep is almost completely covered by turf.

Nothing is known about the origins of the site, but historians have suggested it was built between 1100 and 1189, possibly by William FitzOsbern, Earl of Hereford, who is known to have had a manor at Lydney.

Lydney Park is located just south of Lydney on the A48. A long drive leads through the deer park to a parking area in the field beyond the house. The house is generally closed to the public but the gardens, Roman site and museum are open on specified days throughout the spring and summer months. 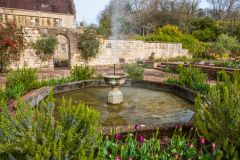 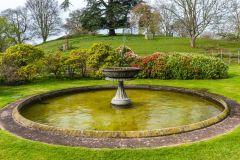 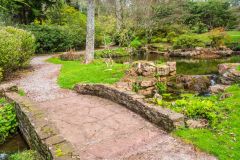 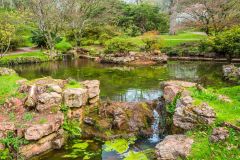 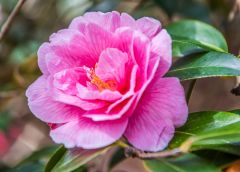 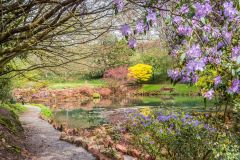 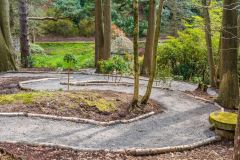 More self catering near Lydney Park

Self Catering near Lydney