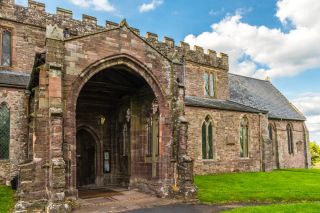 Dilwyn, St Mary Church
St Mary's, Dilwyn, was founded in the late 12th century on the site of an earlier church. The church consists of a nave with north and south aisles and a north transept, west tower, south porch, chancel, and north vestry.

The west tower is the only part of the 12th-century church to survive, though the spire was largely rebuilt in the Victorian period. The transept dates to the 14th century, while the south porch was added in the Elizabethan period.

The walls are built of red sandstone rubble and ashlar. The nave of the 12th-century church was replaced by a larger nave around 1300 but the roofline of the original nave can clearly be seen in the wall above the present tower arch.

The nave arcades are in a simple Early English style, and most of the aisle windows are dated to about 1300. These windows feature early Decorated Gothic tracery. 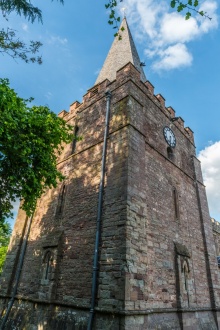 The west tower and steeple

The Early English chancel was built around 1305, possibly under the auspices of Wormsley Abbey, which seems to have claimed the church at Dilwyn shortly before that time.

The east window is in early Decorated Gothic style punctuated by a large, pointed trefoil above a three-light main window section. In the north wall of the chancel is a tomb recess containing the effigy of a knight in armour, thought to be Sir George Talbot (d. 1387).