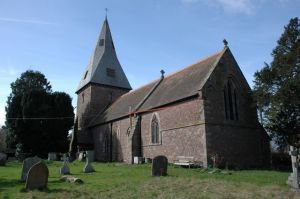 Monkland, All Saints Church
All Saints is an attractive Norman church with a Victorian interior. The Victorian restoration includes a richly painted ceiling in the chancel and colourful stained glass. The church is composed of a nave and chancel of roughly equal width, and a stocky west tower topped with a steep, shingled broach spire built of oak.

Monkland church dates to the 11th century. It was founded as a Benedictine cell of the Abbey of Conches in France. From the late 11th century the abbey maintained a cell at Monkland.

The church was extensively refurbished in Victorian style starting in 1866 under the direction of the ubiquitous Victorian church architect GE Street.

Historic features to survive the 1866 restoration include a 14th-century sedilia and piscina in the south chancel wall. The font is 12th century, with a plainly carved round bowl in a tub shape. The pulpit is 19th century, but set into the floor near its base are several 14th-century tiles.

On either side of the nave are reset 12th-century lancet windows.

Monkland's claim to fame rests on its 19th-century vicar, Sir Henry Williams Baker, who served the parish from 1871-1877. Baker wrote numerous hymns, the most popular of which was 'The King of Love my Shepherd Is'. He also helped compile and publish 'Hymns Ancient and Modern', still a staple in many churches.

Still in use is the organ used by Baker. It was built in 1866 by JW Walker, under strict instruction from Baker. The organ is listed by the British Institute of Organ Studies as being of national heritage importance.

More self catering near Monkland, All Saints Church >>

More bed and breakfasts near Monkland, All Saints Church >>