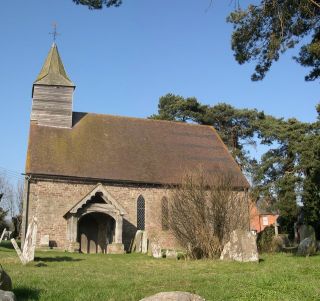 Stretford, St Cosmos & St Damian Church
The church of St Cosmas and St Damian is a redundant church set beside a farmyard. The church is most unusual in that is almost as wide as it is long. This is partly explained by the fact that the church has not one, but two, naves, and a chancel for each.

Remarkably, a single roof spans the width of both naves and two side aisles. The roof was built in 1540, but the nave arcades date to the 13th century.

A pair of 16th century carved wooden rood screens separate the naves from the chancels. Between the screens stands a Jacobean pulpit. The most notable feature of the interior - apart from its sheer size - is a pair of 14th-century effigies depicting husbands and wives of the Delabere family.

The dedication of the church might raise some eyebrows; there are only five English churches dedicated to St Cosmas and St Damian; The Blean (Kent), Challock, (Kent), Sherrington, (Wiltshire), and Keymer (West Sussex), and Stretford is the only one of these to have a shrine to Cosmas and Damian.

The saints were two 4th-century Syrian brothers who practised medicine but would accept no payment for their services. Instead, they used their gifts to try to convert their patients to Christianity. The brothers are the patron saints of physicians and surgeons. Perhaps the dedication to two brothers relates to the fact that there are two naves and two chancels at Stretford? A far-fetched theory perhaps, but an intriguing one. The interior features very fine woodworking.

Stretford Church is in the care of the Churches Conservation Trust and is generally open 24 hours a day.