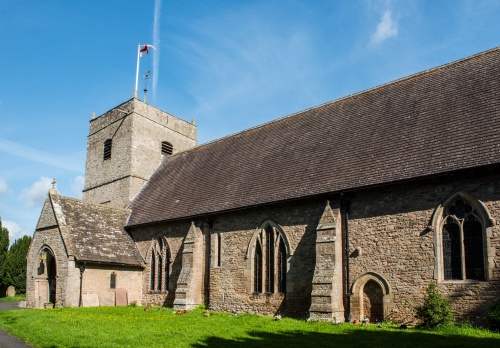 Eardisland is one of Herefordshire's famed Black and White villages. The parish church of St Mary the Virgin is a 12th-century building with the addition of a 14th-century chancel, vestry, and south porch. 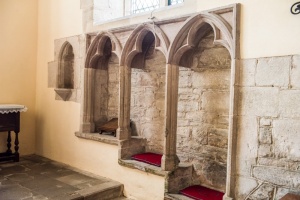 The tower is much more recent; it was built in 1760 to replace one that collapsed in 1728. The entire building was restored in 1864 by architect Henry Curzon, and many of the interior furnishings date to this time. The entire cost of the Victorian restoration was just £2000.

The building probably stands on the site of a much earlier Saxon church. The chancel roof dates to the 14th century, as does the sedilia and nearby piscina, and the two easternmost windows in the nave.

Most of the interior furnishings date to the Victorian restoration. The nave roof is part of the 1864 restoration but you can see a beautifully carved and painted 16th-century tie-beam from the original roof.

The oldest part of the church is the nave, which was probably the whole extent of the church in the 12th century. At the east end of the nave, a pair of 14th-century tomb-niches face each other. The niches would probably have held table tombs and perhaps effigies but no trace of these remains.

One of the most intriguing historical features of St Mary's Church is a richly decorated 14th-century grave slab in front of the chancel screen. The slab bears a faded Latin inscription that translates as 'Amen: Here lie the remains of Alesia wife ... of Burton whose soul lies in God's hands. Amen' This is thought to commemorate Alice, wife of Ralph St Owen of Garnston and Burton. Ralph died around 1355 and Alice is thought to have died 14 years later in 1369. 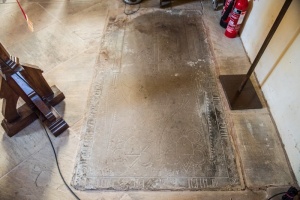 Above the slab is a carved oak panel depicting the coat of arms of the Clowes family of Burton Court quartered with the Chetham family arms. This commemorates the marriage of Mary Chetham to Samuel Clowes in the early 18th century.

Under the tower arch is a reset medieval screen thought to date to the late 15th century. The screen is beautifully carved and is decorated with running vine ornament carvings.

Among the most interesting memorials in the church is a wall tablet to James Kinnersley (d 1798) and his son James (d 1804). Another tablet commemorates William Evans of Burton Court (d 1822). Much simpler than either of these two tablets is a small neoclassical wall plaque to Mary Meredith, wife of Thomas, who died in 1767. Another tablet in Greek style commemorates John Brewster of Burton Court (d 1804) and his wife Anne (d 1796). The epitaph describes them thusly:

Excellent understanding exerted to the Purposes of active Benevolence.
Formed a distinguishing Part of their highly estimable Characters.
Their Friends will affectionately recollect their Kindnesses,
The Poor their Charities.
Be it the Study of their latest Descendants
To imitate their Virtues.

The colourful stained glass in the four-light east window was designed by the famous firm of Burlison and Grylls. The stained glass depicts Biblical figures as well as two British figures; St Columba and the Venerable Bede.

The window was a gift of Lt Colonel and Mrs Clowes of Burton Court in thanks for Colonel Clowes' safe return from the Boer War. At the top of the window are fragments of 13th-century stained glass with coats of arms of prominent local families including the Clowes, St Owen, and Brewster families. Another reminder of the Clowes family's close connection to the church is the organ, given in memory of Lt WP Clowes, who died at Amiens in 1917.

The font is Victorian and replaced a medieval font which now stands in the porch of Burton Court.

Just north of the churchyard stands the moated remains of a Norman castle motte, now covered with foliage. 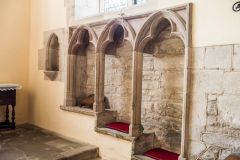 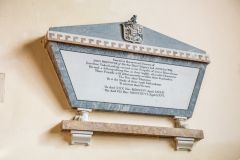 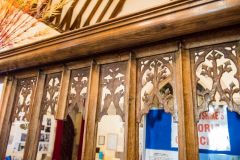 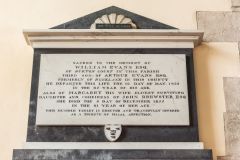 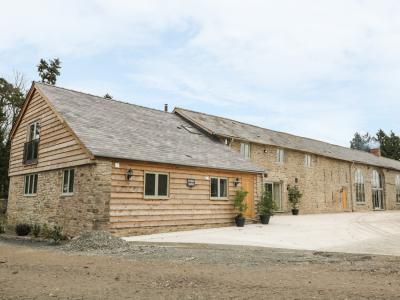 A spacious, detached barn set in the village of Eardisland in Herefordshire, it can sleep twelve people in six bedrooms.
Sleeps 12

This detached cottage is set on the banks of the River Arrow in Eardisland and sleeps eight people in four bedrooms.
Sleeps 8