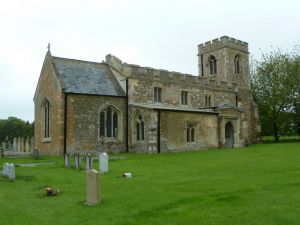 Edworth, St George's Church
An early 13th-century church with a wealth of excellent carving, St George's belonged at one time to St Neot's Priory, which must account for the exceptional quality of the woodwork and carved stone decoration.

The church was begun about 1200, and the chancel and side aisles were added about a century later. Unusually, the aisles have porches at their western ends rather than the side of the aisle. The east window of the south aisle has a restored window from about 1330. In the 1830s the chancel was reduced in size due to subsidence.

Perhaps the most unusual feature of St George's church is the freestanding 12th-century piscina. I can't immediately bring to mind any other parish church in the area with a freestanding piscina, certainly not one this old.

There are small areas of 14th-century wall paintings still to be seen, and some medieval stained glass in the windows of the chancel and clerestory. At the north-east corner of the nave you can see the staircase that used to lead up to the top of the rood screen, now vanished.

There is a ring of three bells, the oldest of which dates to 1480.

One other interesting feature is the carved wooden choir stalls, dating to the 15th century. Many are decorated with carvings of animals. One carved finial resembles a dog, another looks like a bear and yet another like a headless lion. The octagonal font is 15th century and has different carvings on each traceried panel.

St George's is a pretty country church, with interesting Decorated and Perpendicular features worth seeing. The church is now in the care of the Churches Conservation Trust and is no longer in use for regular worship. It is normally open daily to visitors.

Access is by a farm access road off the A1, through the farmyard of Manor Farm. It is about halfway between the A1 exit and the village of Edworth itself.