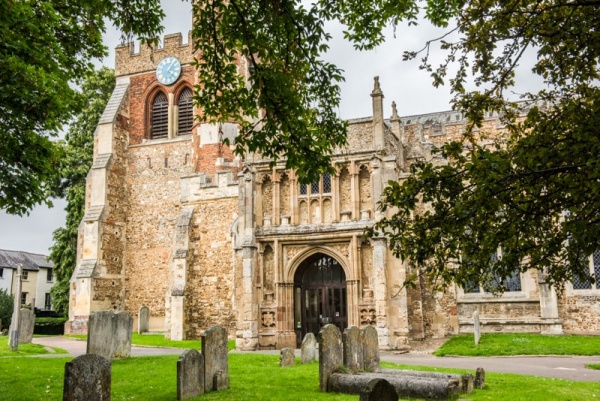 The attractive medieval church of St Mary in Hitchin can trace its origins back to the late 8th century. In AD 792 King Offa of Mercia established a Benedictine monastery on this site. In AD 910 the monastery was badly damaged by fire and rather than rebuild it on the same site the monks moved to nearby St Albans. What remained became the parish church.

A church was recorded in the Domesday Book of 1086 but in 1115 it was damaged in a storm, or as the chroniclers called it at the time, a 'great wind'. The church was restored only to be struck by lightning in 1292 and damaged once more in an earthquake in 1298.

Once again the townsfolk rebuilt the church, using bricks from the Roman town of Verulamium. The construction was poorly done and the roof collapsed in 1304. Once more it was rebuilt, but in 1311 the tower began to lean badly so the townsfolk hurriedly added angled buttresses at each corner.

The bulk of the present building dates to the 14th and 15th centuries. On the south-east corner of the tower is a sundial installed to celebrate the Restoration of the Monarchy in 1660. 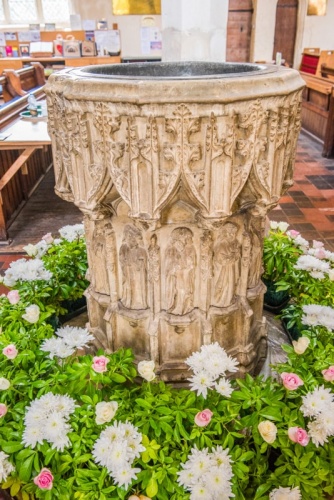 Curiously, the church's original dedication was to St Andrew, but during the late Middle Ages to powerful Guild of Our Lady was established in the church and under their influence, it became known as the Church of St Mary. In 1475 the Guild, also known as The Fraternity, received a license from Henry VI to change the dedication.

The south porch was added in the 15th century by Nicholas Mattocke, a wealthy wool merchant. To the left of the porch door you can see Mattocke's wool mark, a combination of the merchant's initials and the 'Sign of the Four', a reversed numeral 4 that evolved from the early Christian Chi-Rho symbol. Most of the wonderful 15th-century interior furnishings were paid for by local wool merchants, a reminder of how lucrative the wool trade was in the 15th century.

The glory of St Mary's is its wonderful medieval timber roof (or, more correctly roofs in the plural). The eastern end of the north aisle roof dates to the early 14th century and is an outstanding example of medieval timber construction.

Other highlights include a beautifully carved 15th-century font, made of fine-grained limestone from Caen. Around the font stem are figures of the Twelve Apostles, badly damaged by Puritan soldiers during the Civil War. The soldiers were billeted in the church in 1645 and also used it as a stable, bringing their horses inside the building. 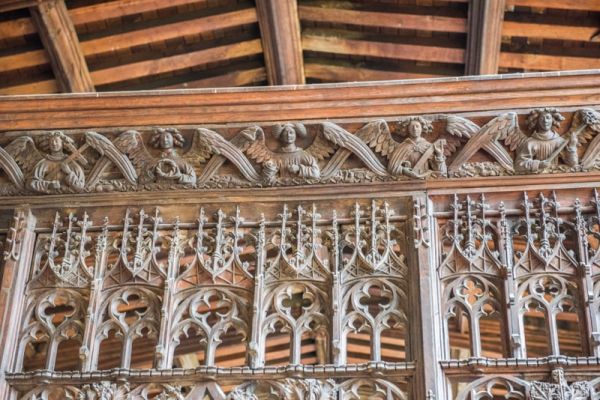 Also 15th century is the wineglass pulpit with an adjoining clerk's desk. The pulpit originally had a sounding board but this has been lost. Near the pulpit are two parish chests, one dating to the 15th century and the other to the 16th century.

Over the south entrance is a squint; a small window situated in the small chamber over the porch so the priest could keep a close watch on comings and goings in the church below.

Look for the superb late-medieval wooden screen, carved with figures of angels. The angels carry shields and the Instruments of the Passion. It was given in 1450 by John and Alice Poulter. John Poulter's elaborate tomb is in the Trinity Chapel. Also in the Trinity Chapel is the only medieval stained glass in the church. Just seven fragments survived the depredations of Puritan soldiers in the Civil War. Two fragments depict Edward IV and his wife Elizabeth Woodville.

Beyond the screen are the fraternity stalls used by the 'Guild of Our Blessed Lady St Mary the Virgin'.

The altar rails are modern and were made by the Robert 'Mousey' Thompson workshop in Kilburn, Yorkshire. Look for Thompson's trademark mouse figure carved on the end of the rail.

The chapel is adorned with wall monuments to the local Radcliffe family. Near the altar rail in the chapel is a medieval floor tile known as St Mary's Tile which depicts a 'franklin' or 'freeman'. 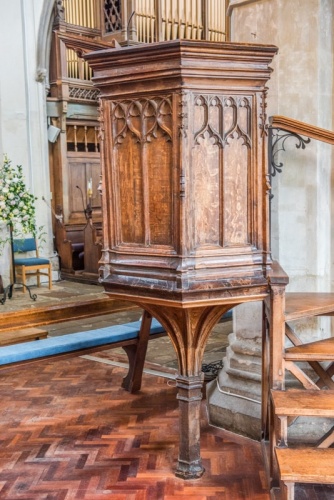 In the floor are several very good medieval brasses, the oldest of which dates to 1421. One of the most interesting brasses is that of John Herte, a late 15th-century vicar, who died in 1499. Above the Herte brass are two hearts with teardrops, a pun on Herte's name. Another brass depicts a woman in a shroud.

You can still see the entrance to a charnel house, used as a gaol by Parliamentary soldiers during the Civil War. The charnel house door handle has heart decorations. This is a rebus, or rhyming pun on the name of James Herte, mentioned above.

According to legend, Dick Whittington was on his way to London, accompanied, naturally, by his cat. He stopped overnight in Hitchin, and when he heard that St Mary's was plagued with mice and rats he left his cat in the church overnight. The cat killed all the rodents in the church, and in gratitude, the residents of Hitchin had a corbel carved with a likeness of Whittington and his cat.

You can see the corbel high on the north-west wall of the south aisle. Whittington's figure was damaged by the Parliamentary soldiers but you can easily see the cat.

Is the story true?

Well, no, it isn't, for the dates are all wrong. What probably happened is that the story of Dick Whittington and his famous cat was confused with a local worthy named Richard Whittington, of Stevenage, whose memorial stone is opposite. 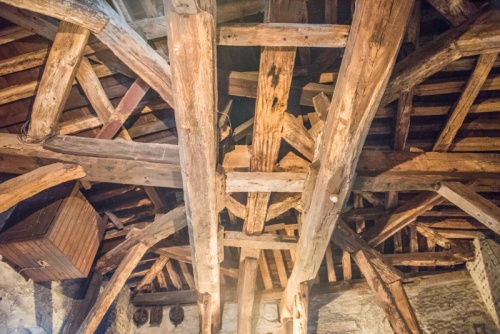 The medieval belfry roof and bell-frame

In the north aisle are three medieval effigies brought to St Mary's from Temple Disney. One effigy depicts Sir Edward de Kendale, who fought at Crecy and Poitiers. In 1361 he founded a Gilbertine convent known as the Biggin, close to the church. Another effigy is that of Sir Edward's wife Elizabeth, who died in 1376.

The third effigy is that of Bernard of Balliol (d 1153), Lord of the Manor of Hitchin. He fought in the Second Crusade and was one of King Stephen's supporters against Empress Maud. Bernard was an ancestor of John Balliol, who served briefly as King of Scotland in 1292. Bernard founded the Templar Preceptory at Temple Disney.

When we were visiting the church we got into a conversation with one of the churchwardens. He invited us to climb the tower and see the bell chamber, with its original medieval timber frame. After seeing the ancient frame we climbed to the roof for a wonderful view down on the market square. The tower is usually open only on special heritage open days throughout the year so we were very lucky! 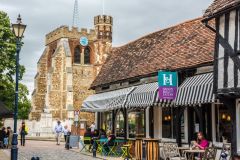 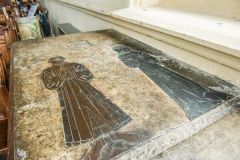 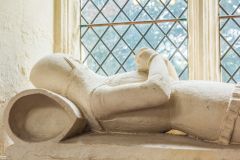 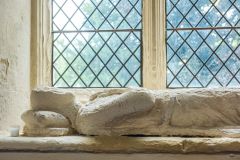