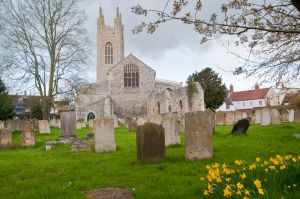 This attractive church in the centre of Bungay has a very striking tower which is a landmark for miles around. The tower was built in the 15th century when St Mary's was constructed to serve a small Benedictine priory.

After the priory was dissolved under Henry VIII the church survived to serve the people of Bungay. A few remnants of the medieval priory buildings still stand to the east of the church.

The church, and much of the town, was badly damaged by a fire in 1688. As a result, much of the interior dates from the late Georgian period and from a subsequent Victorian rebuilding.

The roof has finely carved bosses, featuring angels and various animals. The War Memorial Chapel has a 17th century carved panel donated by author H Rider Haggard, who lived nearby.

Also from the 17th century is a dole cupboard, used for storing bread to give to the poor. The cupboard has a delightful carving of a rat upon it - perhaps to keep out the real rats?

St Mary's is no longer used for regular services and is cared for by the Churches Conservation Trust. The church is located just a stone's throw from Bungay Castle.